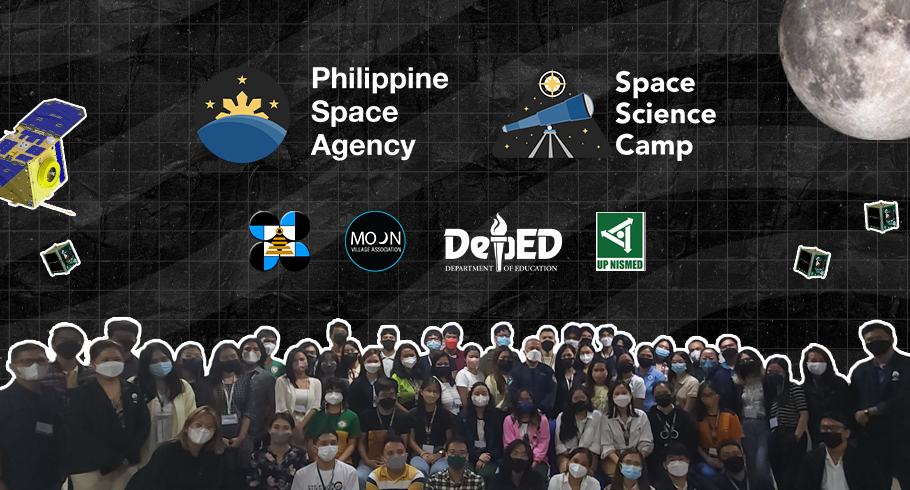 It’s not just the catchy mission names like “Sun: AOL” or “Oh my Venus” that impressed the scientists from the Philippine Space Agency (PhilSA) who evaluated the space mission proposals presented by participants during the last day of LIFT OFF: PhilSA Space Science Camp 2022 held virtually on 21 July. Ms. Jamaica Pangasinan, Senior Science Research Specialist at the Space Mission Control and Operations Division (SMCOD) of PhilSA says, she was struck by the incoming senior high school students’ level of environmental and social awareness as reflected in their outputs: “The mission objectives showed the students’ eagerness on solving present challenges and threats confronting our environment. It was heartening to see that. I hope they stay passionate about helping the people and the planet as they pursue their interest in space science and technology.”

Touch Down Earth: Space Mission Proposals is one of the culminating activities of the three-day hybrid camp held from 19 to 21 July, organized by PhilSA in partnership with the Department of Education (DepEd), Department of Science and Technology Science Education Institute (DOST-SEI), Moon Village Association (MVA), and the University of the Philippines National Institute for Science and Mathematics Education (UP NISMED). The activity was designed to see whether the participants were able to learn the concepts from Day 1’s lectures on space missions and satellite payloads. On Day 1, Ms. Pangasinan conducted the lecture on space missions, while Dr. Paul Leonard Atchong Hilario, Space Science and Technology Applications (SSTA) Researcher II at PhilSA Spacecraft Payload and Communications Systems Development Division (SPCSDD), facilitated the discussion on satellite payloads. “The ideas presented showed that the students researched their proposals well. They used not only what they learned in the camp, which is apparent in their presentations, but also, concepts and technologies they figured out themselves,” Dr. Hilario says.

Fourteen science high schools from the 16 divisions of Metro Manila selected by DepEd to join the camp presented their space missions. Each team was given five (5) minutes to describe the mission of their satellite, its key technical features, and why it is important. PhilSA Earth Sciences Space Mission Studies Division Senior Science Research Specialist Mr. Mark Jayson Felix noted the variety of missions the students came up with ranging from Earth Observation to space debris monitoring to planetary probes: “I am surprised with the diversity and high level of the technical accuracy of space missions presented. This tells me that we won’t be short of space missions to pursue in the future.”

The mission presentations were rated by Ms. Pangasinan, Dr. Hilario, and Mr. Felix based on creativity, technical soundness, and time management. Two (2) missions bested the rest of the proposals. These are “MIMA” or the Monitoring Illegal Mining Activities in Remote Areas by Bianca Louise B. Cruz and Oscar A. Araja II of the City of Mandaluyong Science High School, and “V-SAMS” or the Venus Seismic Activity Monitoring Satellite by Peter James Lyon and Ysabela Juliana Bernardo of Caloocan City Science High School.

The students behind MIMA explained that their satellite mission aims to protect the environment and strengthen the implementation of mining laws and regulations in the country. Based on their proposal, MIMA would be a Synthetic Aperture Radar (SAR) satellite that could see through the cloud cover to detect changes in areas where mining activities could be present. It would use optical imagers to capture images.

The objective of V-SAMS, on the other hand, would be to learn more about the Earth’s twin planet, Venus, particularly, its seismic activities. To be able to achieve this, V-SAMS would use infrared imaging to monitor the surface temperature of Venus’ volcanoes, identify which ones will erupt, and discover other active volcanoes on the planet. It would also have an interferometric SAR (InSAR) to detect deformations and signs of seismic activity on Venus’ surface. In addition, V-SAMS would be equipped with an optical payload to take high-resolution images.

The mission proposals as well as the camp lectures will be uploaded to this page within the month.

On Day 2, held in person at the University Hotel, UP Diliman, Quezon City on 20 July, all student campers went head-to-head at the High Tide: Space Science Contest. The participants were given 30 minutes to answer a pen-and-paper elimination test consisting of 50 questions. Lance Chrysler De Jesus of Caloocan National Science and Technology High School got the highest score in this round. De Jesus also clinched the second spot in the quiz bee finals. Lee Ramses Ibannez from Makati Science High School won third place, while Benedict Pangilinan of Navotas National Science High School won the championship.

“The space science camp team is truly grateful to our partners, resource persons, participants, facilitators, and supporters. As we prepare for a bigger camp next year, we hope everyone will continue to support PhilSA in all its initiatives,” LIFT OFF co-lead Dr. James Cesar Refran said.