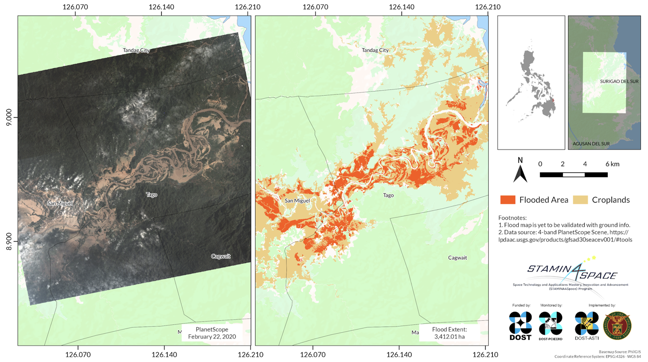 Approximately 3,168 hectares of croplands in San Miguel and Tago, Surigao del Sur were flooded due to Severe Tropical Storm (STS) Auring (international name: Dujuan), according to maps processed by the Space Technology and Applications Mastery, Innovation and Advancement (STAMINA4Space) Program.

Using satellite images, STAMINA4Space researchers were able to make preliminary assessments on the impact of the storm, particularly on crops. The 3-meter resolution images from PlanetScope were captured on the morning of February 22, 2021—a day after Tropical Storm Auring hit Surigao del Sur.

Using Normalized Difference Water Index (NDWI), the researchers were able to determine the flooded areas in the municipalities of San Miguel and Tago, Surigao del Sur. STAMINA4Space researchers estimated that 3,412 hectares of land were inundated, with 92% of it (3,168 ha) being cropland. NDWI is a parameter used to detect and monitor water surfaces in the area.

Pre-disaster satellite images of these croplands revealed that most of the land area only contained sparse vegetation at the time STS Auring crossed the region. Upon checking the cropping calendar cycle in the region, it confirmed that under normal circumstances, planting season should have just begun at the time the storm passed. However, these are still subject to on-ground validation.

The latest report from National Disaster Risk Reduction and Management Council (NDRRMC) showed 34,678 individuals or 9,672 families affected by STS Auring in San Miguel and Tago, while 131,994 individuals or 37,247 families in Surigao del Sur were affected¹. The whole province also suffered PHP 69.8 M damages on rice production according to NDRRMC¹. These were the estimated damages incurred during the seedling and vegetative stage of the crops, according to the Department of Agriculture (DA)’s bulletin². Aside from rice, Surigao del Sur’s major crops also include coconut, banana, sweet potato, cassava and corn. On the other hand, the livestock and poultry industry incurred around PHP 3.4 M worth of damages¹. These can still be further validated with reports at the local level.

According to the Department of Public Works and Highways (DPWH), the Surigao-Davao Coastal Road and K1362+689 Hubo Bridge in San Agustin, Tandag City, Surigao del Sur was still impassable as of February 22³.

STAMINA4Space Project’s imaging and assessment capabilities are some of the technologies that are being transitioned to the Philippine Space Agency (PhilSA). These efforts are in line with the agency’s Key Development Areas (KDAs), particularly Space Research & Development and Hazard Management & Climate Studies.

The Space Technology Applications Mastery, Innovation, and Advancement (STAMINA4Space) Program is funded by the Department of Science and Technology (DOST), monitored by DOST’s Philippine Council for Innovation, Energy, and Emerging Technology Research and Development (DOST-PCIEERD), and implemented by DOST’s Advanced Science and Technology Institute (DOST-ASTI), and the University of the Philippines Diliman (UPD). It further aims to develop deep expertise that enables and sustains the growth of a local scientific-industrial base in space technology and applications in the Philippines.