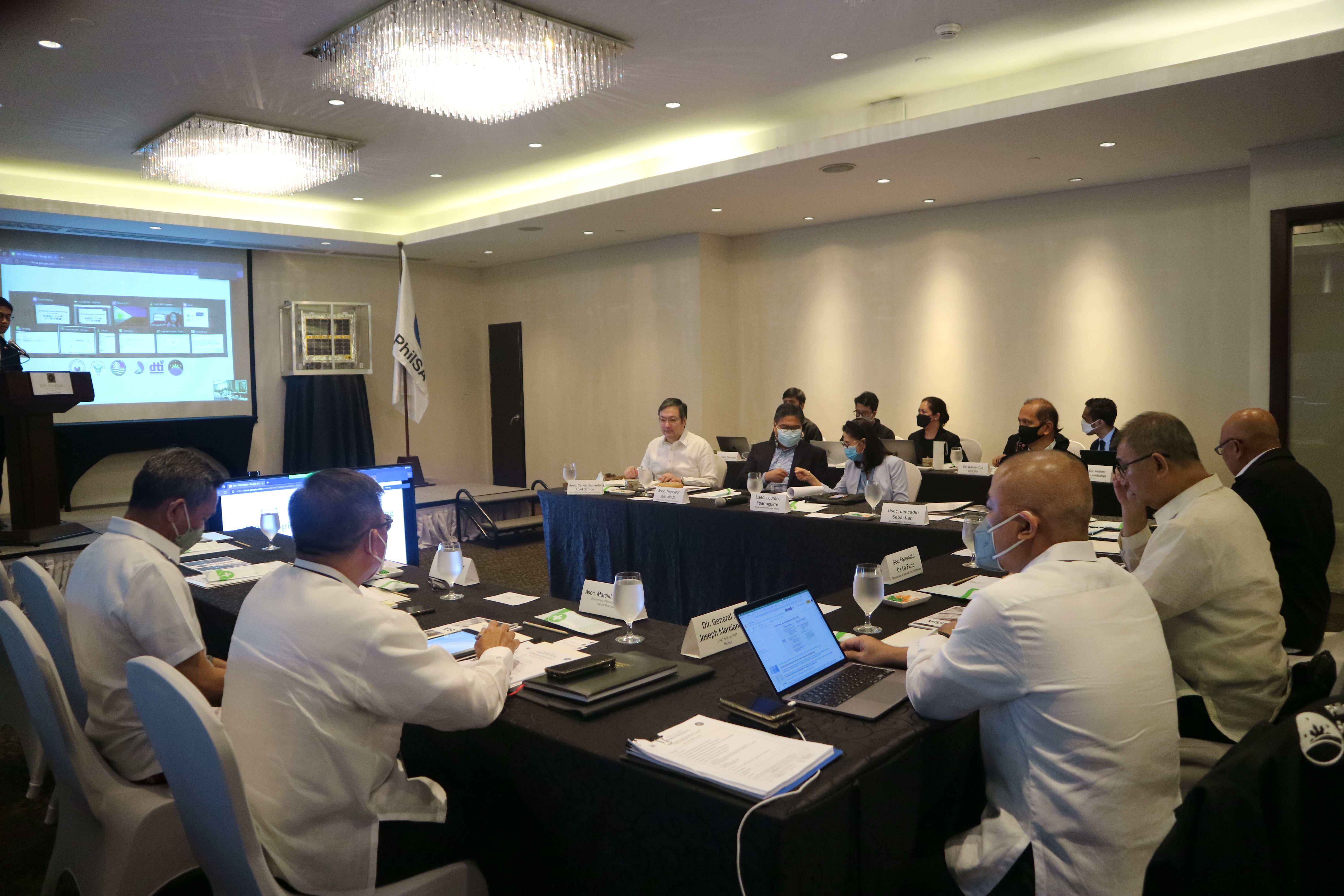 The meeting was chaired and called to order by Chair-designate Secretary Fortunato T. de la Peña of the Department of Science and Technology and Co-Vice Chairperson of the Philippine Space Council.

In 2021, the Agency continues to focus on creating a conducive environment for space science and technology applications (SSTA) innovation in the country through improved access and resource-sharing, and formulating SSTA policies. For 2022, PhilSA’s thrust is embodied in the ISKUELA initiative, which stands for “Inclusive SSTA Knowhow Utilization, Exchange, and Localization Activities”. PhilSA projects under ISKUELA aim to multiply the value of current local space capabilities by cascading PhilSA’s know-how and extending it to various sectors of Philippine society, from the academe, government agencies to industry and the private sector.

In line with the ISKUELA thrust, PhilSA also continues to seek global opportunities to further enhance its capacity building efforts towards strengthening the local space ecosystem. The Agency was successfully awarded a grant from the Asi@Connect Program for its project SIKAP+ or Space Infrastructure, Know-How and Applications Acceleration through Promotion and Training. SIKAP+ aims to expand the reach of PhilSA’s local capacity-building efforts in space science and technology applications (SSTA) by leveraging cooperation in the Asia Pacific region, especially among emerging space actors and new space entrants.

PhilSA is also participating in the National Copernicus Capacity Support Action Programme for the Philippines (CopPhil) and the Pan-Asia Partnership for Geospatial Air Pollution Information (PAPGAPI). These projects are set to be kicked off this year. The CopPhil, in particular, is a pioneering project with a €10 million funding from the European Union (EU) for a  duration of three years, will support the country’s objective of developing and applying space technologies to strengthen the nation’s resilience to natural disasters and climate change.

Dr. Marciano also reported the recent awarding of scholarships to the first batch of students who will undertake masters and doctoral studies under the Advanced Degrees for Accelerating Strategic Space R&D and Applications (PhilSA AD ASTRA) scholarship program.

PhilSA intends to award more recipients this year, especially with the launch of the Advancing Core Competencies and Expertise in Space Studies (ACCESS) Nanosat Project, which will continue the capacity-building efforts initiated by the STAMINA4Space Program’s STEP-UP Project. In addition, the signing of the Memorandum of Understanding (MOU) with the Fulbright Philippines earlier this year launched the Fulbright Philippines SSTA scholarship, which provides more opportunities for Filipino scholars to gain first-hand experience in educational exchanges in space R&D. Expansion of the local space industry efforts were among the highlights of Dr. Marciano’s report. Following its launch in October 2021, PhilSA’s INCENTIVISE project, which stands for Introducing Non-Geostationary Satellite Constellations Test Deployments to Improve Internet Service, is currently being implemented.

Dr. Marciano also provided updates on the Multispectral Unit for Land Assessment or MULA Satellite, emphasizing the benefits the FIlipinos will reap from the project. “We see MULA as a game changer…as a sovereign satellite, MULA will provide our country with control and unrestricted access to commercial quality Earth Observation data. We stand to reap the benefits of strengthening the components of the space value chain domestically.”, Dr. Marciano said. The institutional video about MULA, as the Philippines’ first of next-generation commercial-grade satellites, was presented during the meeting.

Consistent with the Agency’s mandate to develop and implement national and international space policies, PhilSA has been pursuing the ratification of and accession to the liability and registration conventions of the United Nations (UN). During the multi-stakeholder consultation held in December 2021, all attending government offices expressed their concurrence on the said ratification of the UN Treaties.

DFA Usec. Yparraguirre further expressed the Department’s renewed commitment to the PSC in advancing PhilSA’s objectives in the international arena during her special message.

Towards a stronger inter-agency cooperation in SSTA

PhilSA’s involvement in various National Government Task Forces and Committees were also underscored, showing the government’s increasing reliance on SSTA through mobilizing space data in areas of national security, environmental conservation, food security, and livelihood. To this end, the Agency is continuously improving public access and resource-sharing of SSTA by optimizing access to different sources of satellite data for the country.

Dr. Marciano also reported updates on the 2021-2030 Decadal Survey activities conducted in 2022. Following the approval of the resolution on expanding the focus areas to include Communications and Navigation (FA 7) and Defense and Security (FA 8) and conducting a targeted request for information (TRFI) on data products, processing tools, and personnel, PhilSA spearheaded activities in coordination with various government offices, private organization, and the academe, which helped identify the pressing challenges and objectives under said focus areas. In addition, initial findings on the capability to interrogate satellite-based data from the TRFI survey revealed biases on common products generated and the gaps that provided information for future space missions and capacity building efforts. The analysis and synthesis across eight focus areas will be completed and incorporated into a 2021-2030 Decadal Survey Report by June 2022. PhilSA’s Engr. John Leur Labrador, MULA’s Project Manager, addresses the council on the importance of building satellites for the country. Engineers and scientists from PhilSA and DOST-ASTI join him on stage.

The 5th PSC meeting comes amidst the impending change of the national administration this year. With this, the Philippine Space Agency expressed its gratitude to the sitting members of the council. Engineers and scientists from the Philippine Space Agency and the DOST-ASTI led by MULA satellite project manager and PhilSA Chief of Spacecraft Mechanical and Autonomous Systems Development Division Engr. John Leur Labrador, presented plaques of appreciation to the council members.

The event also provided an opportunity for the PSC members to meet the Filipino space engineers, scientists, and researchers, including those who were involved in building and operating the Philippines’ Diwata-1, Diwata-2, and the Maya small satellites who are now working for the Agency. Through this interaction, PhilSA was able to showcase the value of the country’s current space capabilities and the importance of further investments in SSTA. DOST Sec. de la Peña further recognized the accomplishments of PhilSA and DOST-ASTI scientists and engineers.

The Philippine Space Council was created under the Philippine Space Act (Rep. Act No. 11363) and acts as the principal advisory body for the coordination and integration of policies, programs and resources affecting space S&T applications. It is currently chaired by President Rodrigo Roa Duterte, with PhilSA Director General Joel Joseph Marciano Jr., sitting as the head of the Secretariat.

The council is scheduled to meet  for the 6th Philippine Space Council Meeting in August 2022.