#PhilippineSatelliteWatch: Space for the Environment
Posted by: Philippine Space Agency 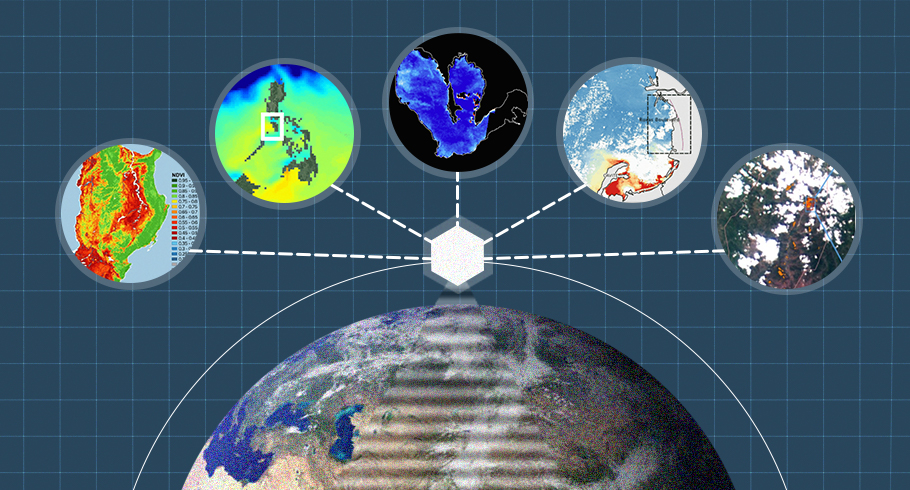 For November's edition of #PhilippineSatelliteWatch, we featured satellite images of environmental issues in the Philippines.

The role of outer space in environment monitoring and climate change mitigation is becoming more and more crucial. Space-based technologies, such as remote sensing and Earth observation, allow for a better scientific understanding of the environment. These provide support for decision-making and positive environmental action, such as resource management and rehabilitation.

The 26th UN Climate Change Conference took place from 01 to 12 November 2021 in Glasgow. More commonly known as COP26, it is the 26th “Conference of the Parties” that refers to the 197 nations that agreed to the United Nations Framework Convention on Climate Change in 1992. In line with COP26, and November being #EnvironmentalAwarenessMonth, PhilSA, STAMINA4Space, and DOST-ASTI showed satellite images of various environmental issues in the Philippines.

Deforestation is one of the major environmental issues in the Philippines, which led to the National Greening Program (NGP) in 2011. The NGP was involved in the planting of more than a billion seedlings over a few million hectares of land from 2011 to 2016. To assess the program’s success, researchers analyzed satellite data from Landsat and the Moderate Resolution Imaging Spectroradiometer (MODIS) before, during, and after the program.

Reforestation in the NGP sites was examined concurrently with observed deforestation in Luzon using forest loss data derived from Landsat from 2001 to 2018. The results show that losses declined from 2011 to 2015, but increased from 2016 to 2018. Because of such losses, the net effect is a balance of reforestation and deforestation or no significant gain from the NGP.

Coral bleaching in Palawan and Mindoro

Climate change impacts marine habitats, such as coral ecosystems that are sensitive to changes in their environment. This results in coral bleaching, a phenomenon where corals lose the “colorful energy-giving plants” due to high temperatures. Bleached corals struggle to recover and are more vulnerable to diseases and death. Aside from being home to marine species, corals also protect our coastal areas, thus their loss would likely result in ecological and economic disasters.

The NOAA OISST was also used to map potential coral bleaching hotspots in Palawan and Mindoro. As early as March 2020, coral bleaching near Mindoro Strait (seen in the white rectangles on the maps below) were already signaled by the Sea Surface Temperature anomaly, having a deviation of around 1°C more than its seasonal average. Spatiotemporal monitoring is a technique to capture several images at different times in a given period. An example of this are the images taken by Diwata-1 and Sentinel-3 of the Total Suspended Solids (TSS) in Laguna de Bay at different times of the year.

These TSS “hotspots” can easily be identified from satellite images. They are crucial in identifying potential pollution sources and areas vulnerable to low dissolved oxygen, which may eventually result in fish kill.

Complementary use of Diwata imageries with other optical satellites, such as Sentinel-3, may increase the temporal monitoring of Laguna Lake.

Manila Bay is one of the most notable bodies of water in the Philippines, owing to its cultural, historical, and economic significance. But it has been known as a pollution hotspot, causing it to undergo rehabilitation efforts over the years.

During last year’s Enhanced Community Quarantine (ECQ), Manila Bay’s waters turned bright turquoise. Researchers from STAMINA4Space used satellite images to explain what may have caused this color change. This series of satellite images (Turbidity and Chlorophyll-a) suggest that the discoloration of Manila Bay during the early period of the ECQ is more likely due to increased pollution emanating from Bacoor Bay and Pasig River.

Diwata-2 captured the February 2020 forest fire in Benguet that approximately burned 2,714.59 hectares, excluding other possibly undetected areas covered by clouds and their shadow. Affected areas include Itogon, Bokod, Kabayan, Kibungan, and some parts of Tuba. Maps like these, made using Support Vector Machine (SVM) and Burned Area Index (BAI), can complement data used by other agencies tasked with post-disaster assessment and rehabilitation. See the environment from space