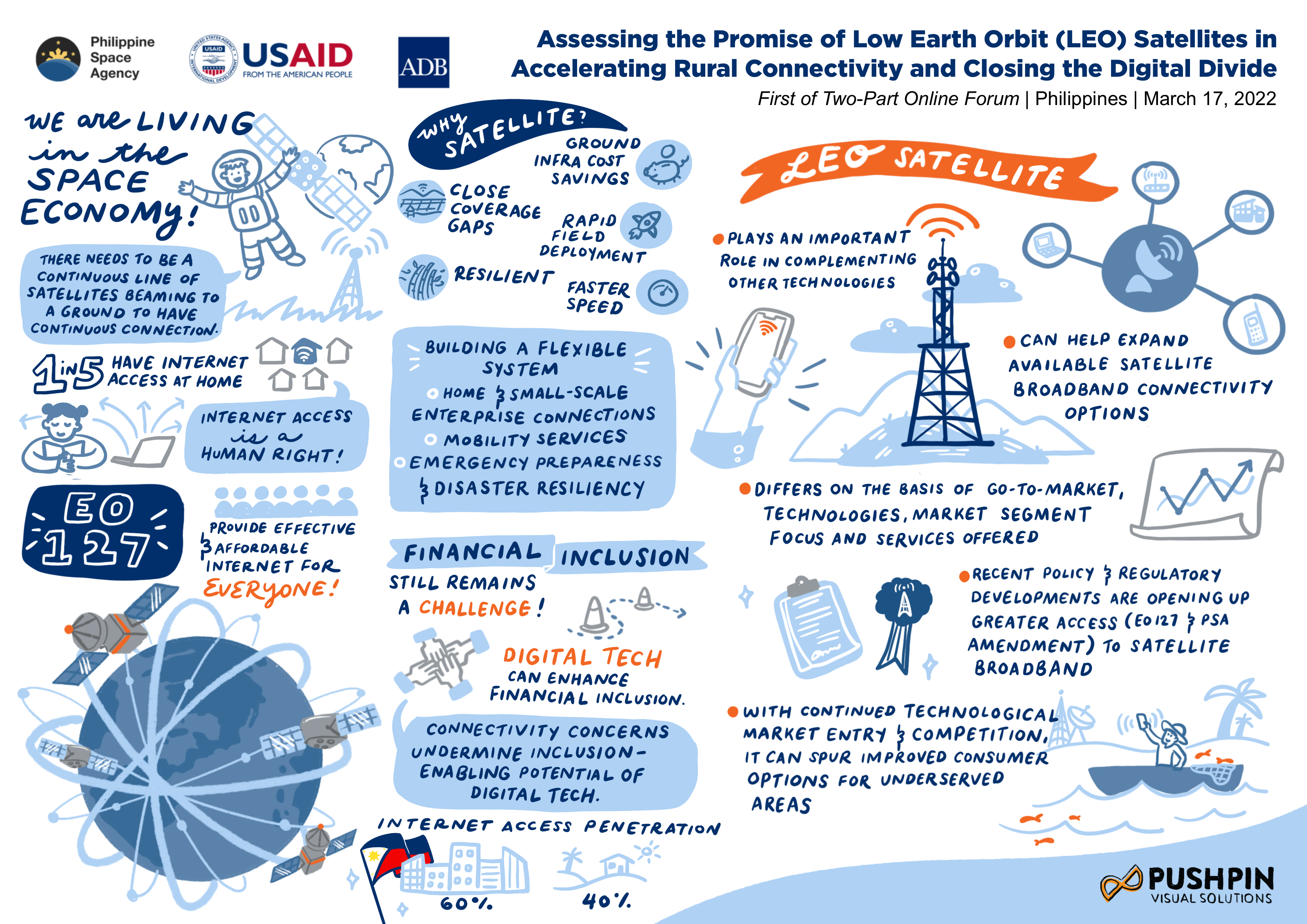 The first of a two-part event, “Assessing the Promise of Low Earth Orbit (LEO) Satellites in Accelerating Rural Connectivity and Closing the Digital Divide” explored LEO satellite technology’s ability to provide wider access to basic services already found online, particularly in areas where challenges in terrain and cost make it difficult to deploy land- and sea-based infrastructure, such as fiber optic cables.

“The internet offers important opportunities for business, education, and civic participation. But for many Filipinos in remote communities, a lack of reliable internet access means that those opportunities remain out of reach. Damage caused by Typhoon Odette in December also reminds us of the value of a resilient and diversified internet infrastructure during natural disasters,” U.S. Embassy in the Philippines Chargé d’Affaires ad interim Heather Variava said during the event.

While the percentage of internet household subscribers have been growing in urban areas (24 percent), subscribers from remote and disadvantaged rural areas (11 percent) fall behind as seen in the 2019 National ICT Household Survey (NICTHS).

“The Asian Development Bank is very interested in bridging the digital divide. We find more and more of our investments, programs, and development activities dependent on people getting connected,” ADB Chief Digital Technology for Development Thomas Abell said.

LEO satellites, which orbit between 200 to 2,000 kilometers above the Earth, are described as a quick launch and potentially affordable option that can deliver speeds and data transfer rates on par with terrestrial networks, as well as drive competition on price and innovation.

International companies developing, deploying, and operating LEO satellite constellations, or clusters of satellites working together as a system, indicated interest or are already working with government agencies and local firms to expand their services in the Philippines.

At the forum, representatives from Amazon’s Project Kuiper, AST SpaceMobile, OneWeb, and SpaceX’s Starlink each presented their services to more than 780 participants who were eager to learn about the new technology. To accelerate entry into the Philippines’ internet ecosystem, some of the providers stressed the need for simplified licensing applications as well as clear and fair rules on spectrum sharing and use.

Project Kuiper and Starlink expressed their intention to focus on household, consumer, and enterprise users and described their user terminals. While focusing also on enterprise customers, OneWeb detailed their role in providing capacity for mobile network operators. AST SpaceMobile, meanwhile, will partner with operators to be able to connect services to mobile phones, acting as a direct extension of telecommunications networks, without the need for land-based infrastructure. All providers expect services to be available to the public by 2023.

Last year, PhilSA, the main agency that oversees activities related to space science and technology applications, called on non-geostationary orbit satellite internet operators, which include LEO satellite operators, to conduct test deployments in remote and rural areas of the Philippines through INCENTIVISE, which stands for “Introducing Non-Geostationary Satellite Constellations Test Deployments to Improve Internet Service.” In February, PhilSA accepted London-based OneWeb’s proposal to test the high throughput and low latency capability of their satellite broadband constellation. The INCENTIVISE Project will allow the agency to witness, experience, and assess the performance and viability of satellite internet services ahead of possible full commercial service.

“We share the vision of national economic development as addressing the digital divide, and promoting the local industry leads to creating more jobs and opportunities for businesses and stimulate the economy as we recover from the pandemic,” PhilSA Director General Joel Joseph Marciano Jr. said.

USAID is helping the Philippines improve its ICT and logistics infrastructure; strengthen the regulatory, business, and innovation environment; and bolster cybersecurity through its Better Connectivity and Access (BEACON) Activity. To help bridge the digital divide, USAID is supporting the Philippine government’s efforts to develop satellite connectivity that promotes inclusive growth, fosters resilient and democratic communities, and empowers Filipinos all across the country.