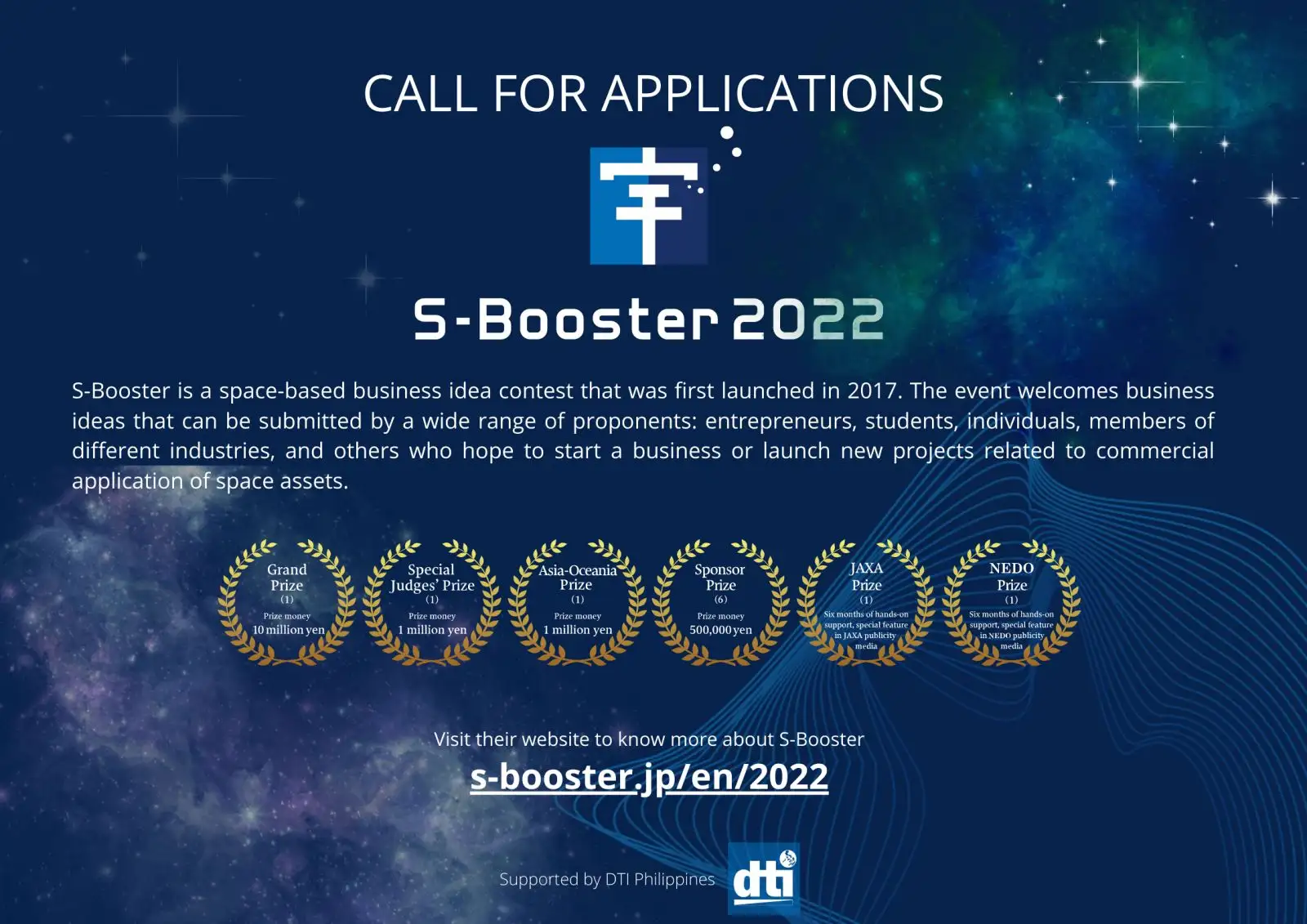 Enterprising individuals and businesses passionate about space can get a chance to win up to ¥10 million in the S-booster competition.

S-Booster is a Japanese space-based idea competition that welcomes business ideas related to the commercial applications of space. The annual event was first launched in 2017 by the Japan Cabinet Office, New Energy and Industrial Technology Development Organization (NEDO), and the Japan Aerospace Exploration Agency (JAXA). The pitch competition is open to individuals, ventures, startups, and businesses in different industries in Japan and the Asia-Oceania region that seek to commercialize their business ideas utilizing space assets such as rockets, satellites, commercial space stations, ground-based systems and technologies, and space data. .

This year’s competition was officially launched on 01 June 2022 at the Department of Trade and Industry (DTI) International Building in Makati City. The hybrid event was organized by the Japan Cabinet Office and the DTI Competitiveness Bureau, in partnership with the DTI Foreign Trade Service Corps and the DTI Tokyo. DTI Undersecretary for Competitiveness and Innovation Rafaelita Aldaba opened the event and introduced the Department’s innovation programs.

Undersecretary Aldaba underscored the importance of building a robust startup ecosystem in the country, hence the Department’s support behind S-Booster: “We have over 800 start-ups, over 50 investors, 35 incubators and accelerators, 200 plus co-working spaces, 40 plus venture capitalists, and right now the valuation of the [Philippine Startup] Ecosystem is around 1 Billion US Dollars,” she said.

Shoichiro Sakaguchi, Director-General of International Cooperation for the Cabinet Office of Japan, introduced the S-Booster competition and presented Japan’s space program: “Japan is supporting many countries to deploy small microsatellites to orbit from the International Space Station using Kibo Module, this allows access to space in a less expensive way than using large vehicles. Japan has collaborated with the Philippines through the Diwata satellites, and I hope for continuous collaborations in the future,” he said. He mentioned that Japan has been inviting the commercial sector for space ventures and that “S-Booster unlocks new space startups in Asia by supporting the commercialization of each idea with Japanese industries.”

Delegates from the space agencies of Japan and the Philippines were invited to speak on their respective space activities to encourage the contestants on how their ideas will be implemented. Space Policy and International Cooperation Bureau Director Noelle Riza Castillo represented the Philippine Space Agency (PhilSA) and emphasized the Agency’s role in space industry development through its various space business development projects. One of these projects is the development of the Philippine Satellite Manufacturing Industry Roadmap 2022-2032, in partnership with the DTI Board of Investments, which aims to support the creation of a safe, robust, and enabling space business environment for the local satellite manufacturing industry, and promote the participation of local space-adjacent industries in the global supply chain. “It is one of the major goals of PhilSA to encourage the growth of a local space industry and economy,” Director Castillo said. Previous contestants shared their hackathon experiences, particularly the skills and mentorship gained during the competitions. Ellarizza Fredelices, Rapid Prototype Development Challenge Award Winner for 2021, shared that the competition provided the opportunity to not just gain knowledge but also prove her project concept. She said that the experience made her feel the need to give back and start her own hackathon for local startups: “My agenda [for joining] was simple–I just wanted to learn. But as the challenge went along, I realized it had something bigger to offer its participants.” She also shared that these competitions provide contestants the opportunity to learn from the experts themselves. “I remembered some of them were authors of studies I cited back when I was doing my thesis. I was fangirling, if I may use the term,” Fredelices said.

S-Booster contestants will go through mentorship programs from established companies to refine their pitches. In the final round, presentations will be made to investors and large companies to promote business matching. The winning space idea will receive the grand prize of ¥10 million.

Applications are open to the Asia and Oceania region. The deadline for applications is on 20 June 2022, 5:00 PM  Japan Standard Time (4:00 PM  Philippine Standard Time).