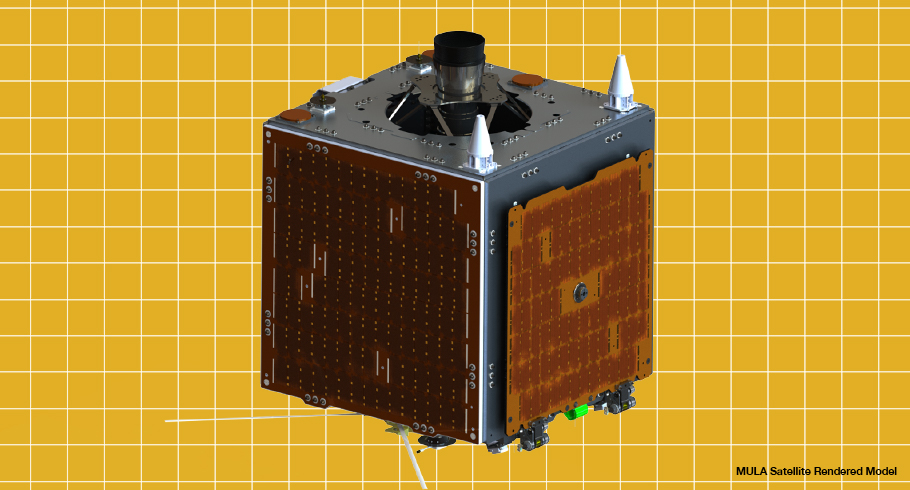 In a virtual press briefing held on September 16, 2021, the Advanced Satellite Development and Know-How Transfer for the Philippines (ASP) Project of the Space Technology Applications, Mastery, Innovation, and Advancement (STAMINA4Space) Program and the Philippine Space Agency (PhilSA) introduced the 16 Multispectral Unit for Land Assessment (MULA) engineers to the press and the public and gave a preview of what can be expected from the Philippines’ steadily growing space sector.

The ASP Project, which kicked off in December 2020, presented the baseline Technical Design and Contract for Phase 1 of the project. Since then, the project has completed critical milestones in the satellite’s development phase. In April 2021, 42 representatives from the Philippines were awarded with Satellite Technology Training course certificates from know-how and satellite development training provider Surrey Satellite Technology, Ltd. (SSTL), and 9 Filipino Engineers were deployed to the UK for hands-on training. Before returning to the Philippines on August 22, 2021, the MULA engineers completed the Preliminary Design Review where they presented a detailed design of each subsystem that showed conformance to the satellite mission, wrapped up consultation for in-country facilities, and concluded the Phase 1 hands-on training of Filipino Engineers in the UK. The ASP Project is funded by the Department of Science and Technology (DOST), implemented by the University of the Philippines Diliman (UPD) and the DOST-Advanced Science and Technology Institute (DOST-ASTI), and done in coordination with the Philippine Space Agency (PhilSA), who will oversee its completion and expected launch by 2023, as well its management and operation thereafter. 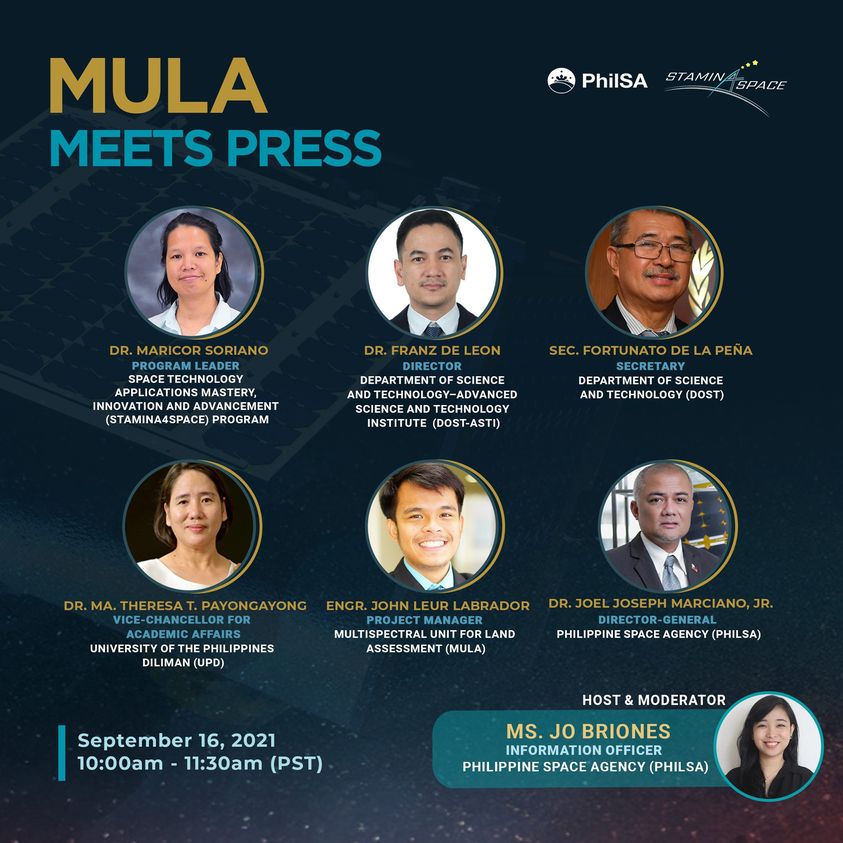 MULA Project Manager Engr. John Leur Labrador gave a detailed presentation of MULA’s technical specifications, applications, and where the team is in the satellite’s timeline. He expounded on MULA’s intended applications: Its TrueColor camera’s capability to capture images for agricultural applications such as crop monitoring and harvesting forecast and record the evolution of infrastructure and public spaces to give information such as the effect of a disaster over area of concern, environmental effects of industrial activities and status and progress of infrastructure projects at remote locations; and the Automatic Identification System (AIS) and Automatic Dependent Surveillance-Broadcast (ADS-B) payloads’ capability to help national security through increased situational awareness via detection of maritime vessels and aircraft within the satellite range.

He also shared what else we can gain from building our own satellite with these capabilities over utilizing data from foreign satellite subscriptions.

“Some of you might be asking, why not just use free data? Why don’t you just buy from other satellites? Yes, there’s available satellite imagery that are for free – but they are not fit for our purpose,” he said, and expounded on how foreign satellites might not capture areas that we are observing at the moment, how they don’t have the colors or spectral bands that we would want and need, and how they might not be at a resolution where we can gather data most effectively.

“More importantly there’s value in space data. Right now, a comparable satellite image that MULA can produce is priced at 64 Pesos per square kilometer. MULA is designed to capture 120,000 square kilometers per day. But let’s try to be conservative – the Philippines is sometimes covered with clouds so we can’t really see anything below the clouds so let’s use a reasonable estimate of let’s say 58 percent of that land area so we come up with 73,660 square kilometers per day of satellite imagery,” he said. “Over 5 years, that sums up to 8.6 billion Pesos of total investment gains. This is just the image alone, and we’re not yet counting the indirect benefits that will be realized when we help with the decision-making process of the different national agencies using satellite imagery. So as you can see, in 5 years, we can recoup and get much more value from the total investment cost that’s initially given to the satellite budget.”

PhilSA Director-General Dr. Joel Joseph Marciano, Jr. discussed the significance of the strides made through MULA. “Obtaining knowhow in satellites and cascading them to local design and manufacturing services will help put the country on a path of building stronger industries In aerospace, semiconductor, electronics, mechanical and materials, for example, that enhance our country’s global competitiveness. Investing in space science, technology and applications can help create more high value skills and jobs, which are useful across a wide range of modern industries,” he said. “At its core, space-grade systems and components are essentially high reliability products, and the capabilities in designing, prototyping, producing and testing of such products can be applied across many industries and applications, e.g. automotive, medical, geothermal, mining, deep water off-shore exploration, military, etc. A Philippine industry that can build more complex, i.e. ‘difficult’, products is poised to capture and offer higher value creation and retention for the country,” he added.

DOST Secretary Fortunato Dela Peña expressed his admiration for the MULA engineers and his hopes for what will come next – with the project being the first official collaboration between DOST and PhilSA. “I really hope that this will lead to the big leap that we hope to accomplish. We may have started late in the area of space technology development, but, as other countries observe, we are catching up fast and I am confident that pretty soon, we will really be, shall we say, in the league of space technology. We are looking forward to reaching even greater heights with you, and of course, with PhilSA, the University of the Philippines Diliman, and of course the DOST-Advanced Science and Technology Institute,” he said.

UPD Vice-Chancellor for Academic Affairs Dr. Ma. Theresa T. Payongayong commended the engineers as well, the significance of these space initiatives, and affirmed the university’s shared goals. “It is not uncommon spending years pouring time and resources and skills of space scientists and engineers into research and development for the country’s benefit. From satellite design devt, to knowhow training, launch, actual use and management, this important technological innovation further strengthens the country’s capabilities to transform and improve the Filipinos’ well-being and the way they live,” she said. “This is consistent with the vision of the University of the Philippines Diliman to serve as a modern research university with a public mission. In the words of Chancellor Fidel Nemenzo, this means bringing together the best minds in different disciplinal clusters to produce innovative and integrated solutions to development changes,” she added.

In his welcome remarks, DOST-ASTI Director Dr. Franz A. de Leon highlighted the bigger journey that lies ahead “Today, an even bigger space journey awaits us as we get introduced to the builders of the country’s first next-generation satellite, MULA. As much as we are all excited to hear the latest updates on MULA, we are also thrilled that this will inevitably increase our space capabilities and provide more opportunities to harness space technologies,” he said.

For STAMINA4Space Program Leader Dr. Maricor Soriano, MULA symbolizes a turning point in the Philippines’ space journey. “Developing MULA is a fitting finale that allows the transition of satellite development from an academic, research setting to an operational, PhilSA-led endeavor,” she said. “Our space initiatives would not be possible without the seamless collaboration of all the institutes represented here today, as well as the media who help communicate our story to the public. May this harmonious relationship carry us all the way to MULA’s targeted launch in 2023.”