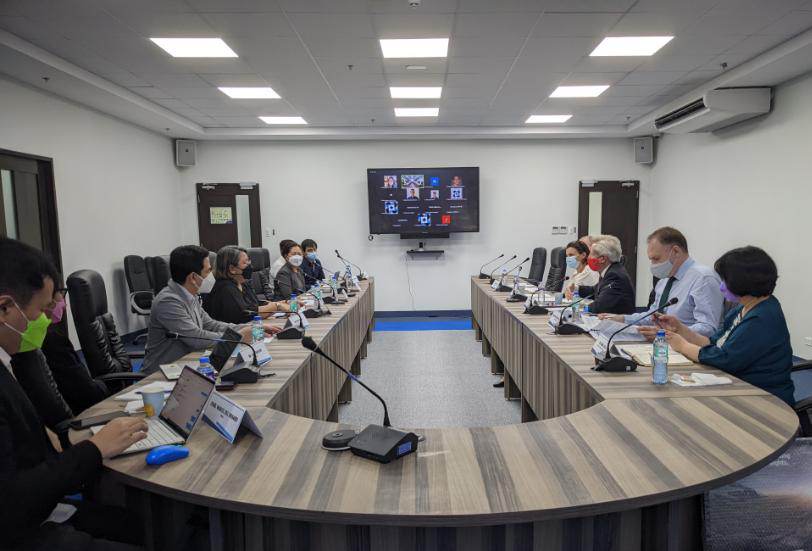 The UK Trade envoy met with the DOST and PhilSA representatives primarily to celebrate the success of the nine (9) MULA engineers who underwent training on satellite system design at the Surrey Satellite Technology Ltd. (SSTL), in the United Kingdom in 2021.

Dr. Banatao presented updates on the MULA project, discussing both the team’s victories and challenges encountered in building the same. She further shared how it would open opportunities for the building of more sovereign satellites in the future. The MULA engineers also shared their experiences during the training with SSTL, highlighting how the mentorship helped them professionally beyond the confines of the laboratories they worked in.

The UK commended Dr. Banatao, Engr. Rahayel, Engr. del Rosario, and the rest of the MULA team  for completing the said training and development program and for the development of the MULA concept design.

During the visit, Dr. Perez also delivered a presentation about PhilSA, its mandate, and the strides the Agency has been making in the space industry since its inception in 2019. She also shared the Agency’s progress in its internal manpower development and PhilSA’s ongoing engagement with its primary stakeholders through the conduct of its decadal survey. Meanwhile, Mr. Graham extended the UK’s appreciation for the Philippines’ continued engagement with the UK on the development of technology and innovation, specifically on space initiatives. Her Excellency Lauere Beaufils also manifested her office’s keenness in maintaining an active cooperation with DOST and PhilSA, both in terms of policy-making and industry-building.

UK Prime Minister’s Trade Envoy Richard Graham was in the Philippines on 14-18 February 2022 to meet with the country’s leaders to promote trade and investment ties with the UK, and to explore other areas of mutual collaboration between the two countries.