#PhilippineSatelliteWatch: Wrath of Typhoon Odette as seen from space
Posted by: DOST-Advanced Science and Technology Institute 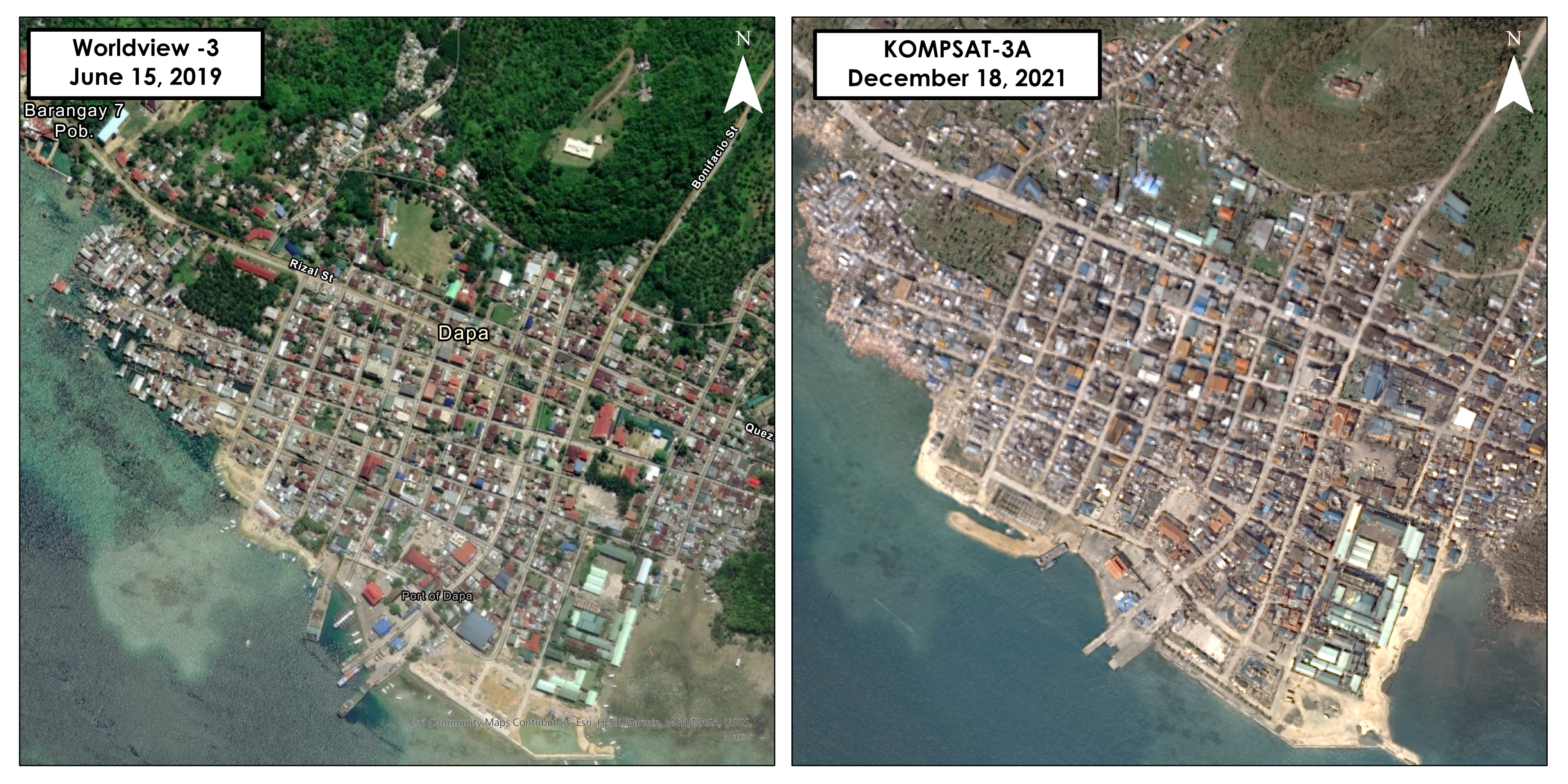 Leveraging from the past and ongoing  Department of Science and Technology-supported projects and related initiatives on disaster mitigation, the Advanced Science and Technology Institute (DOST-ASTI), together with the Space Technology and Applications Mastery, Innovation and Advancement (STAMINA4Space) Program and Philippine Space Agency (PhilSA) now conducts further research on remote sensing, geographic information system, data science, and space data technologies for DRRM and other geospatial applications.

Using datasets from earth observation satellites, we are now able to mobilize efforts through space science and technologies to complement the pre- and post- DRRM initiatives of national and local government agencies.

During the recent onslaught of typhoon Odette (International name: Rai)– which ravaged parts of Visayas and Mindanao in mid-December 2021– DOST-ASTI, STAMINA4Space, and PhilSA closely monitored the typhoon, generating maps of the affected areas to provide near real-time data and information to government agencies as well as the public.

The DOST-ASTI’s Remote Sensing and Data Science: DATOS Help Desk distributed flood impact maps and other datasets to national agencies with disaster management efforts. When there are available SAR datasets concurrent with hazards (flooding, landslide) events brought about by [extreme] weather conditions, DATOS, through its Artificial Intelligence models, detect the potentially inundated and affected areas. Such datasets are also posted on the DATOS Facebook page for public consumption and utilization.

Below are the links to the flood impact maps and other datasets distributed to agencies to aid their post-DRRM efforts:

Similarly, DOST-ASTI’s Philippine Earth Data Resource and Observation (PEDRO) Center consolidated all the satellite images of areas affected by the devastation of typhoon Odette for the DRRM actors to utilize and distribute as necessary. Here is the extent and coverage of capture:

Here are some satellite images taken through the PEDRO Center and processed by the DATOS) Help Desk and the STAMINA4Space Program.

Typhoon Odette made its first landfall in the country on Siargao Island, Surigao del Norte last 16 December 2021. Using a KOMPSAT-3A image of the island taken 18 December 2021, only two days after the typhoon hit, researchers were able to show the extensive damage in the island as compared to pre-disaster images in 2019. Areas in red show possible damaged properties.

According to the National Disaster Risk Reduction and Management Council’s (NDRRMC) latest report on the typhoon, around 7,200 families were affected by Odette in Surigao City¹.

In these images taken by PlanetScope last 17 December 2021, widespread flooding in the city can be observed.

Odette also substantially ravaged some parts of Negros Occidental. Below are images of the cities of Kabankalan, Sipalay and Municipality of Ilog. According to the same NDRRMC report, around 68,000 families were affected with a total of 29 reported casualties in these three cities. In total, Negros Occidental suffered P2.1 billion in damages in agriculture¹.

Researchers from STAMINA4Space Program were able to map the possible extent of flooding in the areas through a combination of Normalized Difference Water Index (NDWI) and thresholding technique, as well as map possible flooded roads.

The satellite image below shows a map of Kabankalan and Ilog taken last December 18, 2021. In this report, approximately 2,958.3 hectares (ha) of land was flooded, with ~2,351.6 ha of flooded cropland. According to NDRRMC’s report, Kabankalan City suffered P273 million damages in agriculture, and the Municipality of Ilog some P 6.2 million¹.

DOST-ASTI and STAMINA4Space Program monitored the flooding in Bohol as well. Images from PlanetScope taken on 18 December 2021 show the possible extent of flooding in Loboc, Bohol. Loboc suffered damages to infrastructure amounting to six million and 200 million for agriculture.

This map of the area shows possibly-flooded croplands and roads in Loboc. Approximately*113.2 ha of land was flooded, with ~73.1 ha of flooded cropland.

DOST-ASTI, STAMINA4Space, and PhilSA have also been initiating capacity and resilience building activities through available S&T infrastructures and research initiatives on earth observation (EO) applications. EO data, when properly used, can considerably combat the risks of climate change and disasters.

Check the consolidated report and prior initiatives in Space Science & Technology and Applications (SSTA) in the Philippines: