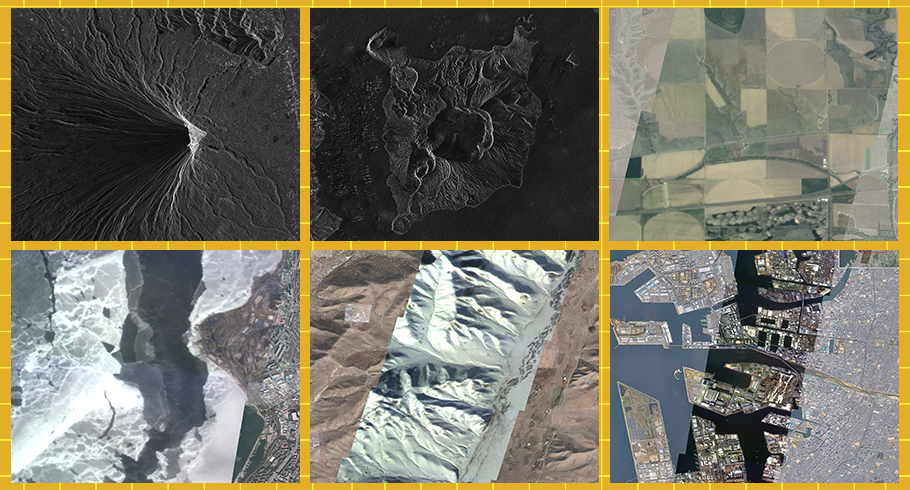 This October, we celebrated the world.

The Philippine Space Agency (PhilSA) kicked off October 2021 with the World Space Week (WSW) celebration. Held annually from the 4th to 10th of the month, WSW is an international celebration of space science and technology, and their contribution to the betterment of the human condition. PhilSA commemorated the occasion with various engaging virtual events for Filipinos and space enthusiasts all over the world.

In the latter half of the month, the PhilSA participated in the Expo 2020 Dubai in the United Arab Emirates (UAE). The delegation to the UAE was led by Director General Dr. Joel Marciano, Jr., accompanied by the Director for Space Technology Missions and Systems Bureau Dr. Marc Caesar Talampas, and Director for Space Policy and International Cooperation Atty. Noelle Riza Castillo.

Diwata-2’s view of the world

In celebration of UN Month, the Diwata-2 satellite took snapshots of different sights all over the globe.

Diwata-2 captured stunning ice formations in Vladivostok, Russia using its High Precision Telescope (HPT) in January, which is the height of winter in the city when temperatures can drop to as low as -13 °C. 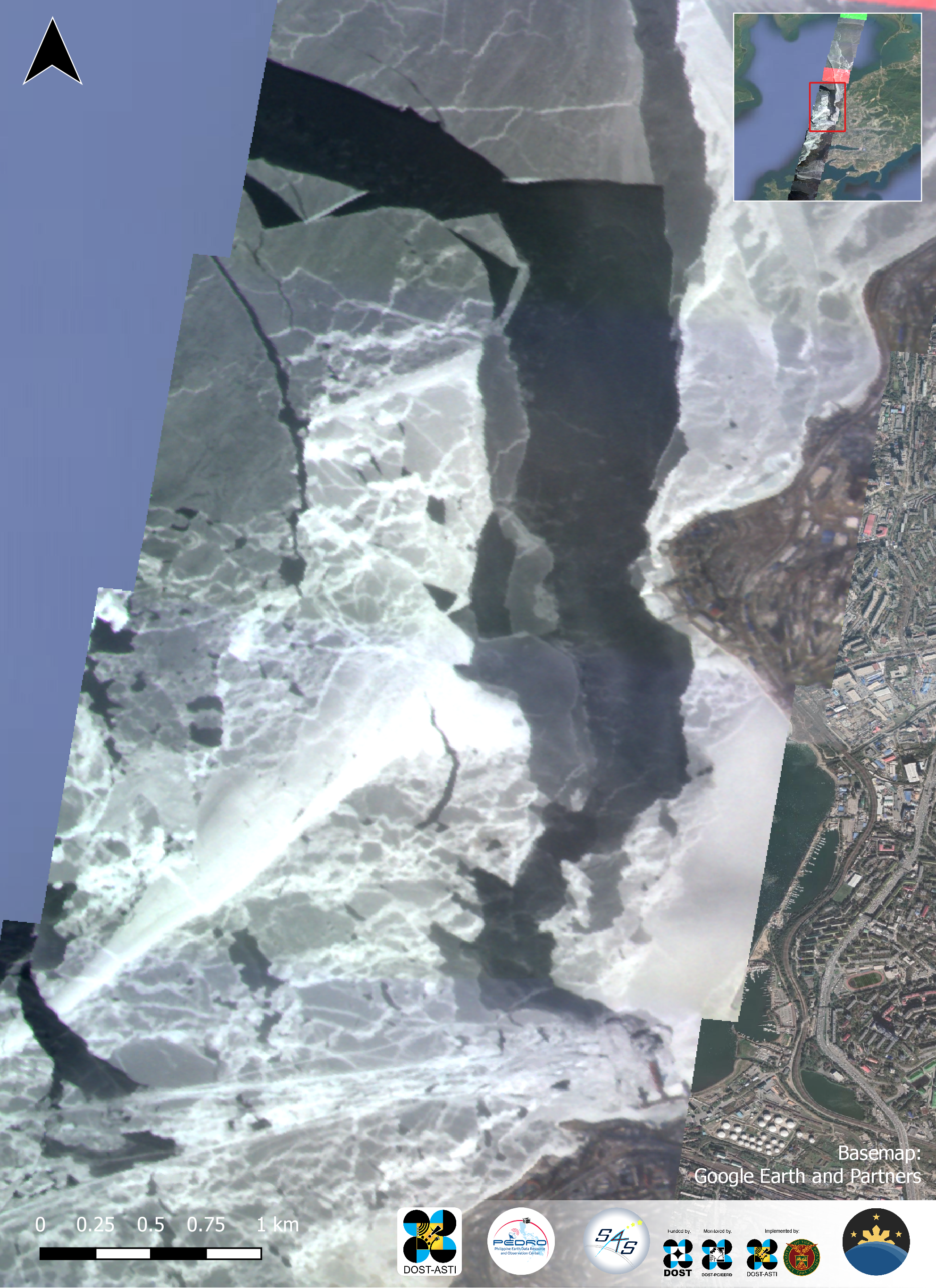 Another set of “cool” geologic features were also captured by Diwata-2’s HPT in Mongolia —snow-capped mountains located in Bayanzürkh in Ulaanbaatar. Purportedly the world’s coldest capital city, Ulaanbaatar is also the largest city of Mongolia and sits at around 1,350 meters above sea level. 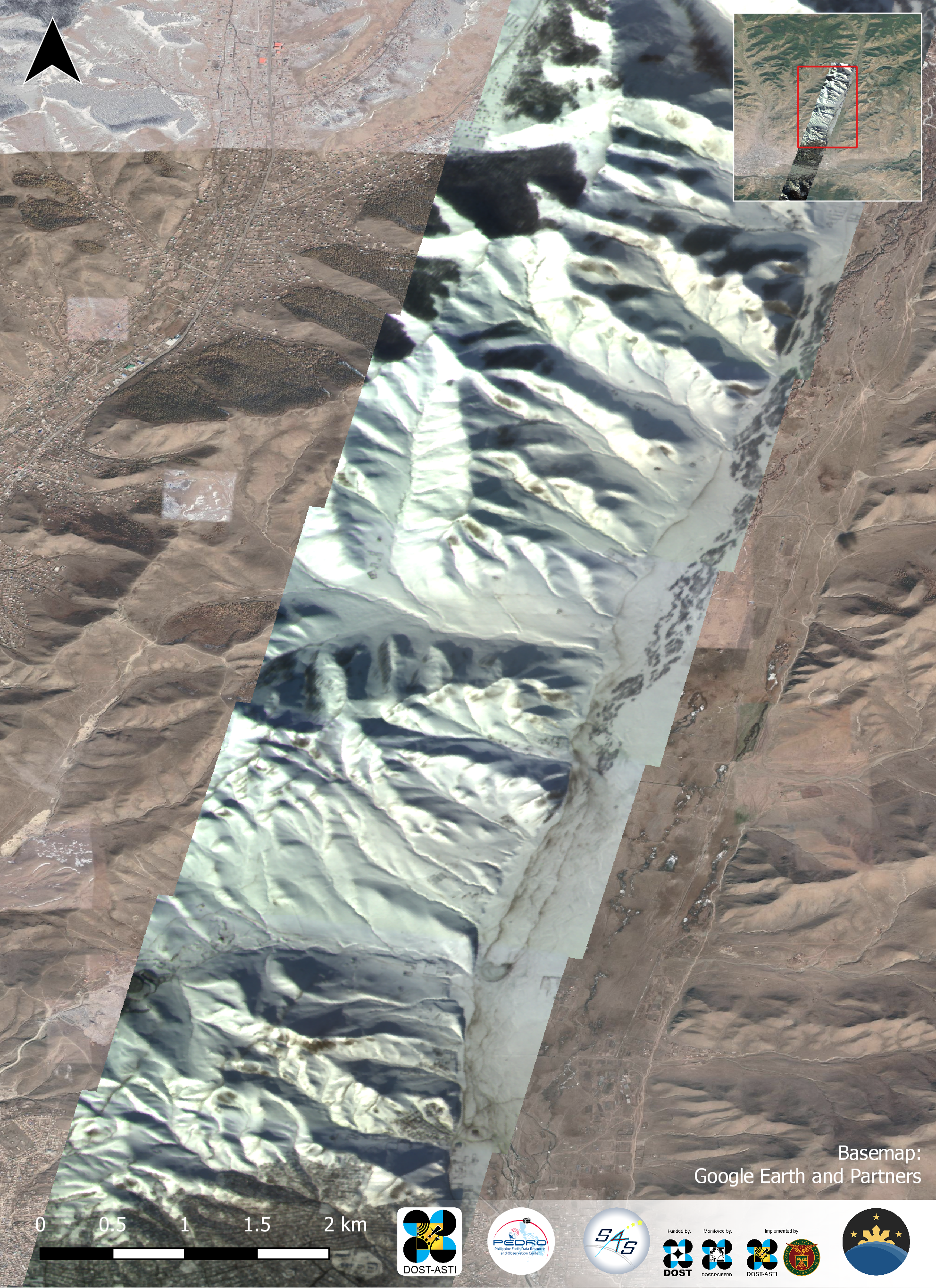 Mountains in the Bayanzürkh district, Ulaanbaatar, Mongolia, as seen by the Diwata-2 satellite on January 30, 2021. Captured, processed, and laid out by the STAMINA4Space Program’s GRASPED Project.

Stunning, natural earth features are not the only interesting things our satellites can see from space. On its world tour, Diwata-2 used its HPT to capture the mosaic-like view of Japan’s Osaka port, one of Asia’s major trade ports. Also known as ancient Japan’s gateway Naniwazu, the port is an integral part of the city’s rich history. 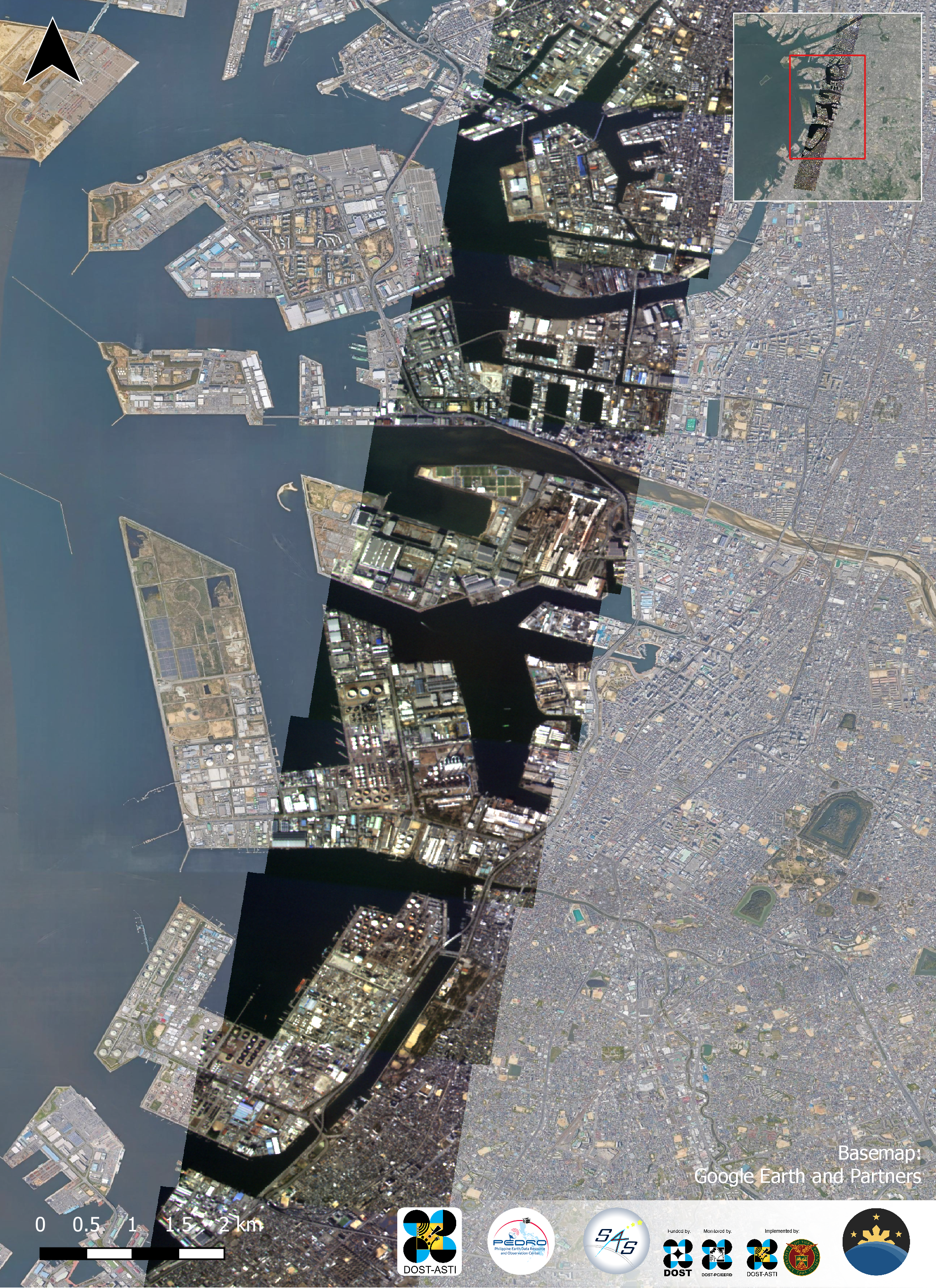 Osaka Ports, Japan, captured by the Diwata-2 satellite on 04 January 2021. Captured, processed, and laid out by the STAMINA4Space Program’s GRASPED Project.

Diwata-2 was also able to take images of interesting agricultural formations in the USA, that at first glance may seem to be reminiscent of crop circles with rumored extraterrestrial origins. These circle fields that were taken by Diwata-2’s HPT, however, are man-made irrigated crops in Indianola and Alliance in the state of Nebraska. 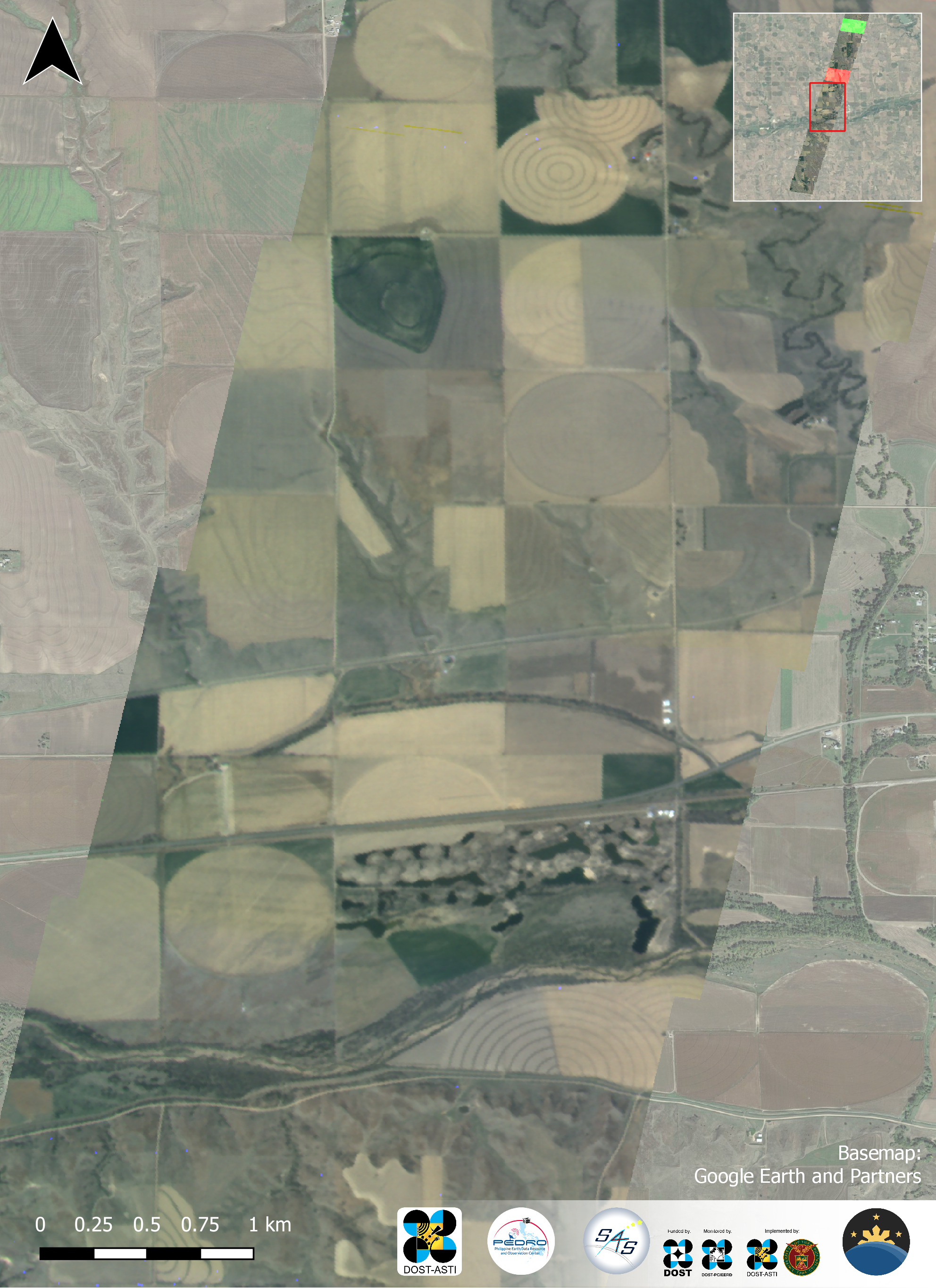 Crop circles in Nebraska, USA, captured by the Diwata-2 satellite on 12 April 2021. Captured, processed, and laid out by the STAMINA4Space Program’s GRASPED Project.

The Philippines—confidently beautiful with a lot of geologic features

While Diwata-2 can take images from other parts of the world, it has already captured 85% of the Philippines since its deployment to space three (3) years ago. Among these are images of the country’s varied complex geological features, attributed to its location in the Pacific Ring of Fire.

The Philippine Earth Data Resource Observation (PEDRO) Center of the DOST-ASTI downloads images from Diwata-2 for further image processing. Aside from images from Philippine satellites, PEDRO also receives data from other commercial satellite subscriptions, such as NovaSAR-1. The Philippines owns a share of the satellite’s data tasking and acquisition through an agreement between the DOST-ASTI and Surrey Satellite Technology Ltd. (SSTL). For this month, PEDRO featured two of the country’s world-renowned volcanoes using the NovaSAR-1 satellite.

Taal Volcano in Batangas, Philippines is one of the “Decade Volcanoes” or the world’s 16 deadliest, most destructive volcanoes [1]. This Synthetic Aperture Radar (SAR) image taken on 14 March 2021 shows the main crater of Taal and its more famous feature, Binintiang Malaki.

Taal Volcano, Batangas, taken by the NovaSAR-1 satellite on 14 March 2021. Captured, processed, and laid out by the PEDRO Center (DOST-ASTI).

Due to its symmetry and near-cone perfection, Mayon Volcano has been considered one of the world’s most beautiful volcanoes. This SAR image of Mayon was taken on 14 May 2021 by NovaSAR-1. With its most recent eruptive episode recorded in 2018, Mayon remains to be one of the Philippines’ most active volcanoes to date. 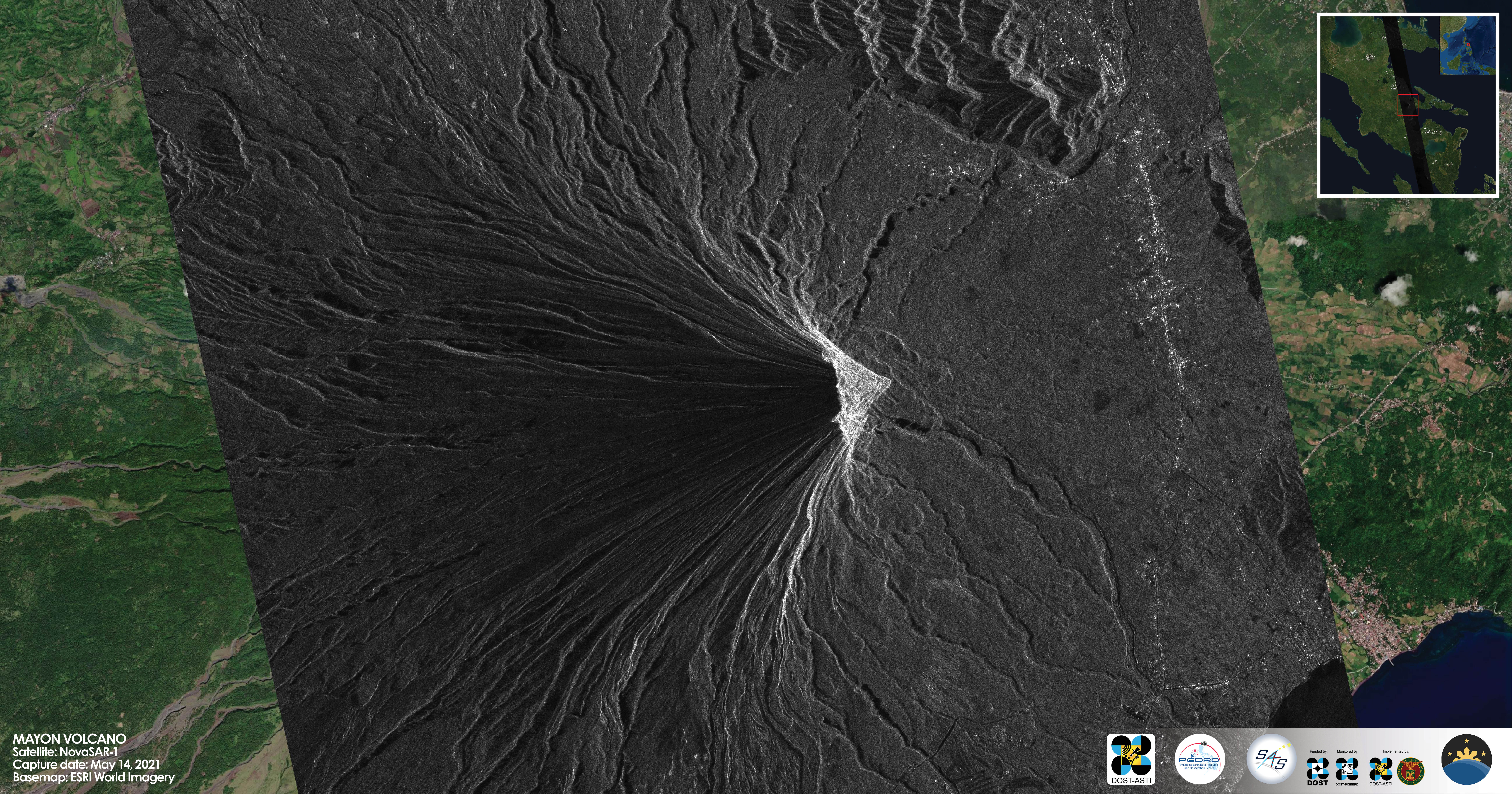 Mayon Volcano, Albay, taken by the NovaSAR-1 satellite on 14 May 2021. Captured, processed, and laid out by the PEDRO Center (DOST-ASTI).

Access these images, wherever you are in the world