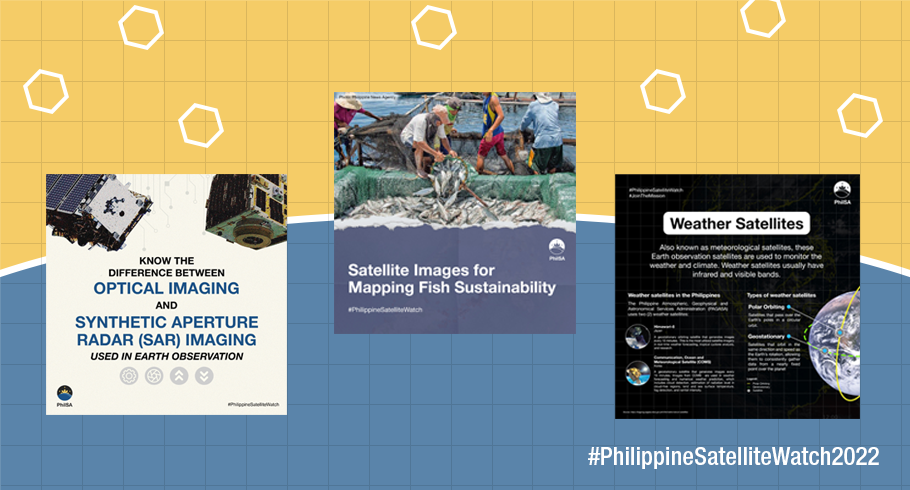 Since the launch of #PhilippineSatelliteWatch in August 2021, the Philippine Space Agency (PhilSA) demonstrated our homegrown space imaging capabilities and Earth observation techniques through satellite images of the Philippines and the world.

How satellite data is captured and made into maps Weather Satellites Used in the Philippines In 2022, satellite images were very useful during severe weather events.

During Typhoon Agaton in April 2022, the Disaster Risk Reduction and Management (DRRM) team of PhilSA produced flood impact maps on areas hit by the typhoon. These maps were disseminated on social media and sent to various government agencies. An example of these flood impact maps is this visualization of flooded areas in Abuyog and Javier, Leyte taken by the ICEYE SAR satellite on 17 April 2022.. The maps show around 1520 hectares affected by the flooding. During severe weather events, the disaster charter is activated. Through this, PhilSA is able to acquire satellite images for damage assessment. These satellite images show the potentially damaged structures in Palawan and Surigao del Norte taken by the Pléiades and Worldview-3 satellites after the onslaught of Typhoon Odette in late December 2021.The images were processed bythe United Nations Satellite Center (UNOSAT) and was made available through the international disaster charter activation Before and after images

Satellite images were also used to illustrate the changes in both urban and rural areas during the onslaught of Typhoon Paeng in late October of 2022. We also captured different parts of the Philippines and the world using the HPT camera of Diwata-2. Apo Reef is home to diverse species of marine life and is the second largest contiguous coral reef in the world! The corals span approximately 34 km² and are visible in this Diwata-2 image. This image was taken on 21 November 2021 by Diwata-2 High Precision Telescope (HPT), and underwent the Support Vector Machine (SVM) classification scheme to classify corals, water, and terrain.
Access Diwata images here: https://data.phl-microsat.upd.edu.ph

See you in 2023 for more #PhilippineSatelliteWatch! #JoinTheMission and follow us on all social media platforms for more information and updates on space.