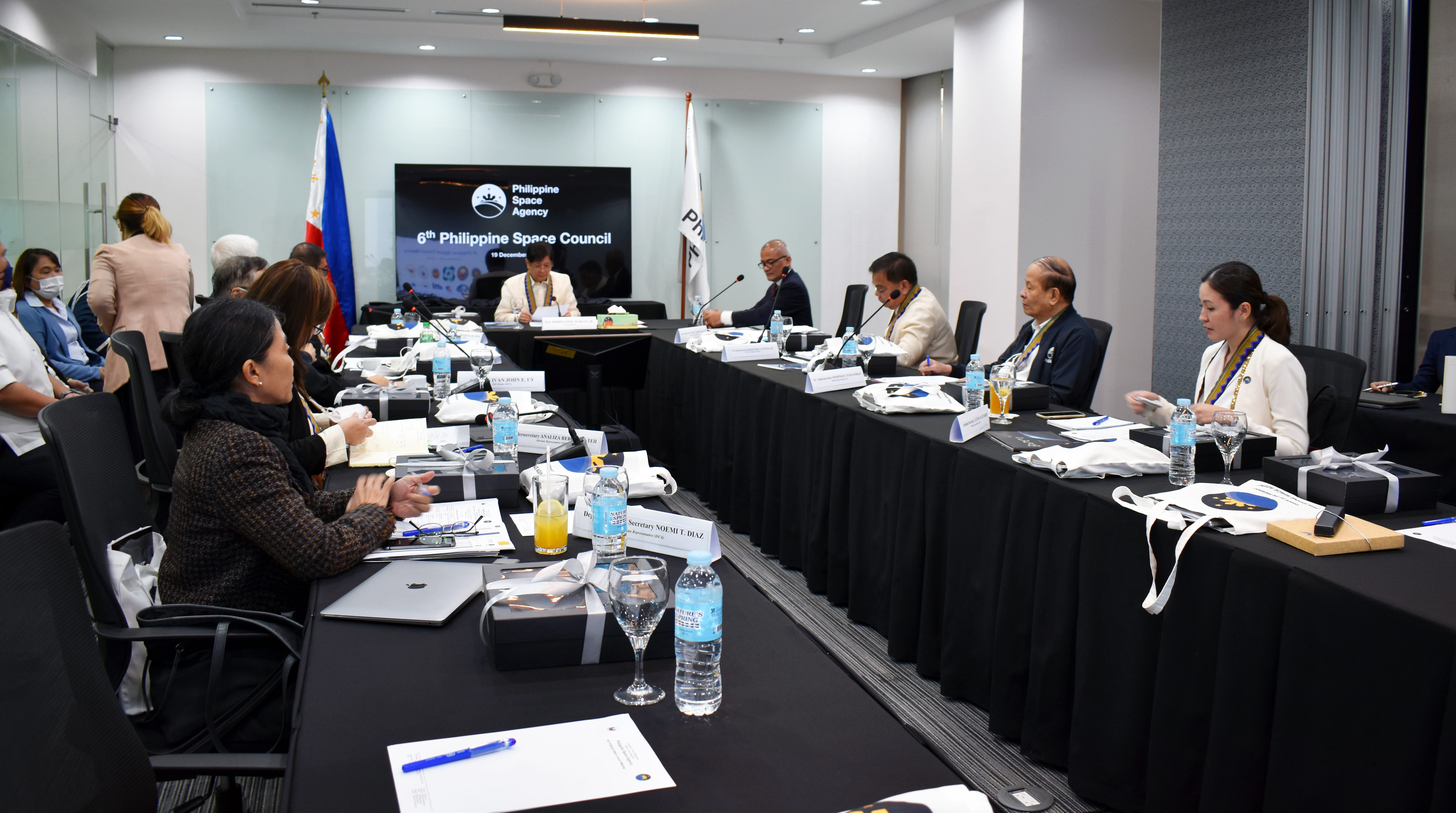 “Only when action is taken on these spaceborne, space-derived, space-enabled capabilities can socio-economic value and benefit be had. For PhilSA, this is a big challenge, but working together and through this Council, we can overcome this through active engagement, design thinking, and agility,” DG Marciano said.

In the meeting, PhilSA proposed a resolution for the annual celebration of the National Space Week or Pambansang Linggo ng Kalawakan from 08 to 14 August, beginning in 2023: “These dates coincide with the enactment of the Philippine Space Act on August 9, 2019. The national space week will promote space awareness, espouse the benefits of space and its impact on the lives of our countrymen, celebrate the contribution of Filipinos worldwide in the field of space, and be a vehicle of inspiration for future generations,” DG Marciano said. PhilSA will formally seek inputs on the resolution from PSC members and submit a memorandum to the Office of the President. The council is expected to act on the proposal in its next meeting in 2023.

In his message, the President said he is impressed with how the country’s current space technologies and capabilities contribute to the work of other government agencies in the environment, agriculture, and national security sectors, among others: “The quality of data we are getting from our satellites (and satellite subscriptions) are extremely useful.” The president also noted how this further encourages the country to have “bigger, better, and more capable satellites” that we can utilize to advance the country’s industries and technology. President Marcos earlier expressed his support for the Multispectral Unit for Land Assessment or MULA Satellite being developed by PhilSA.

The President also directed PhilSA to ensure that data provided to other national government agencies are in readily available and usable form to allow for the “mapping” of the country’s “bio-assets,” and enable the development of bio-diverse areas: “…In terms of green, in terms of bio-assets, there is now a way to quantify your nice fisheries, your agricultural activity…. It is in terms of how much carbon you’re putting out into the air. But the beginning, the first step of that, will be to map,” President Marcos explained.

Among PhilSA’s powers and functions is improved public access and resource-sharing, where the Agency assists other national government agencies and the private sector to fulfill their respective mandates with the help of space data and assets.

The PSC was created under the Philippine Space Act, RA 11363, and is the principal advisory body for coordinating and integrating policies, programs, and resources related to space science and technology applications. Under the law, the PSC shall approve the implementation of Philippine space policies in accordance with international conventions, ensure the appropriate allocation of resources to support PhilSA’s performance of its mandate, and approve strategic directions and decisions for the implementation of PhilSA.

Previously approved resolutions of the PSC include: a resolution to facilitate and support the release of funding sources for PhilSA such as the initial operating fund amounting to 1B Php, and the Philippine Space Development Fund–PhilSA is working closely with the Department of Budget and Management (DBM), Philippine Amusement and Gaming Corporation (PAGCOR), and the Bases Conversion and Development Authority (BCDA) for the release of the said funding; the creation of a Technical Working Group to complete the 2021-2030 Decadal Survey Report, which contains the data mobilization and satellite mission development roadmap of the country, and; the creation of a Technical Working Group on Orbital Debris Protocols to set the standards for information sharing and inter-agency procedures in responding to rocket launches and orbital debris from neighboring states.

Before the meeting, President Marcos, the vice chairs, and members of the PSC had the opportunity to see the country’s satellites up close through exhibit displays created by the Philippine Foundation for Science and Technology (PFST) with the support of the Philippine Council for Industry, Energy, and Emerging Technology Research and Development (DOST-PCIEERD). PhilSA also mounted exhibits showcasing the country’s satellite technologies, image acquisition, and processing capabilities through Earth observation satellites: “The tour this afternoon is also intended to impart a good view of the different components of the space value chain that are manifest locally, and how, with your support, we can continue to build and gain strength in some of these steps, as well as how these activities are already contributing to the work of other departments and agencies in the country in addressing disaster risk reduction and management, environmental protection, climate change, maritime domain awareness, agriculture, and other important concerns,” DG Marciano said.