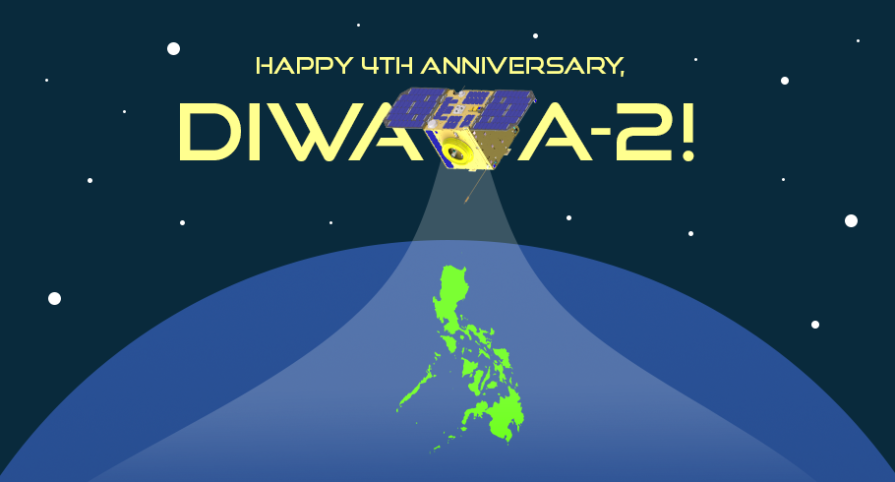 The Diwata-2 Satellite marks its 4th year in space on Saturday, 29 October. Since 2018, the second 50-kilogram Earth observation microsatellite of the Philippines has captured over 112,049 images around the world and covered 94.03% or 282,088 km² of the Philippine landmass. These are utilized for its mission of environmental and natural resource monitoring, and disaster response and management.

Diwata-2 is built by researchers from the University of the Philippines Diliman (UPD) and the Advanced Science and Technology Institute of the Department of Science and Technology (DOST-ASTI) in cooperation with Tohoku University and Hokkaido University in Japan under the Philippine Scientific Earth Observation Microsatellite (PHL-Microsat) Program. It was successfully deployed into 600 km sun-synchronous orbit (SSO orbit) on 29 October 2018 and carries optical cameras for scientific Earth observation. The Philippine Space Agency or PhilSA now operates the Diwata-2 satellite through a Memorandum of Agreement (MOA) signed with the DOST.

Here are some captured images of Diwata-2 over the past year. These images feature the onboard payloads, High Precision Telescope (HPT), Spaceborne Multispectral Imager (SMI), Enhanced Resolution Camera (ERC), and Wide Field Camera (WFC) capturing various scenery from reefs and islands to the monitoring of weather disturbances like typhoons.

Images of Apo Reef, Tubbataha Reef, and Subi reef are captured by HPT at 3-meter spatial resolution. These high-resolution images are adequate for environmental and resource mapping; surveillance and security monitoring. The featured reefs juxtaposed the substantial benthic cover of seagrass and corals shown in Apo and Tubbataha Reef to reclaimed land covered with built-up infrastructures in Subi Reef.

From Tropical Storm to Super Typhoon, Hinnamnor or Henry, entered the Philippine Area of Responsibility (PAR) on 31 August 2022. Diwata-2 payloads, ERC and WFC, captured its rapid intensification with images from 30 August and 04 September. The typhoon’s eye ‘stadium effect’ is observed in the ERC images; the phenomenon is indicative of an extremely intense tropical cyclone.

As Diwata-2 enters its fifth and projected final year of mission in 2023, it will continue to orbit the Earth at 7.560 km/s at 602.8 km altitude capturing thousands more images for environmental monitoring and disaster response and management. The satellite is also expected to cover and capture the remaining 5.97% of the country’s landmass using its SMI payload next year.

Meanwhile, the development of the country’s first and biggest commercial-grade satellite to date, the Multispectral Unit for Land Assessment or MULA, will be in full swing in 2023. Once launched in 2025, data from MULA are envisioned to contribute to the country’s food security, disaster resilience, environment conservation, and national security.