Next generation of PH satellites under way
Posted by: STAMINA4Space Program 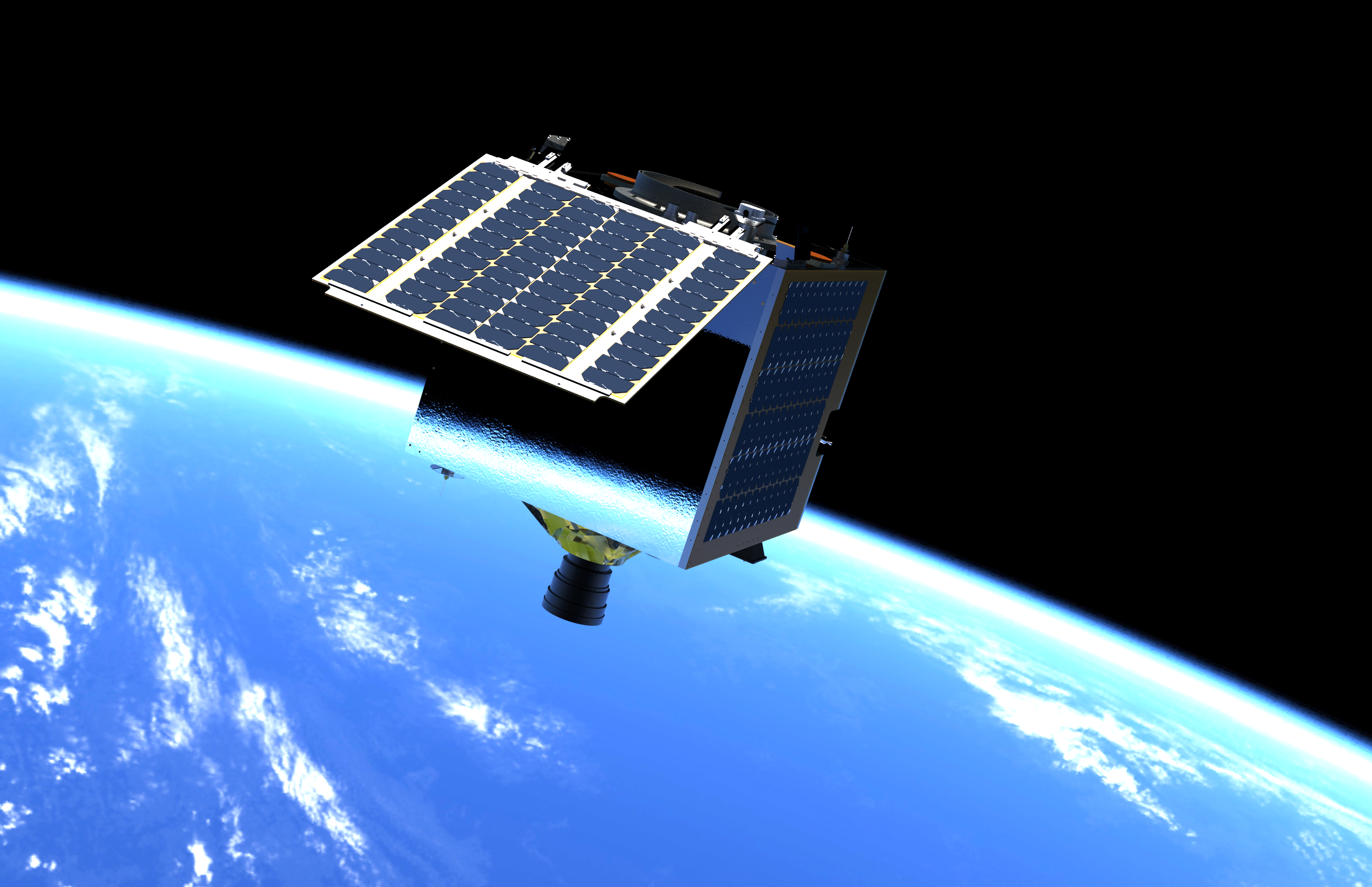 3D render of the MULA satellite. Photo courtesy of SSTL.

PH eyes having new Earth Observation satellite in space by 2023

The Philippines is gearing up for its next generation of satellites. Sustaining the gains from the country’s microsatellites DIWATA-1 and DIWATA-2, plans are underway to have a bigger  Earth Observation satellite that can capture operational-quality – images of approximately 100,000 km2 of land area daily. Dubbed the Multispectral Unit for Land Assessment, or MULA, the commercial-grade satellite will weigh 130kg—the country’s biggest to date.

As shared by Department of Science and Technology (DOST) Secretary Fortunato Dela Peña in a report on February 2021, the newest satellite initiative is currently being developed by the DOST-funded Advanced Satellite and Know-how Transfer for the Philippines (ASP) Project as part of the science agency’s priority agenda under the emerging technologies sector of providing space technology applications to public services. The project is implemented by the University of the Philippines Diliman (UPD) and the DOST-Advanced Science and Technology Institute (DOST-ASTI), and in coordination with the Philippine Space Agency (PhilSA), who will oversee its completion and expected launch by 2023, as well its management and operation thereafter. It is being designed and manufactured together with British company Surrey Satellite Technology Ltd (SSTL). SSTL is one of the leading providers of small satellite development and know-how-transfer.

The new satellite, MULA, will carry a TrueColor camera capable of capturing 5m resolution images with a wide swath width of 120km. It will have 9 spectral bands that can be used for different environmental applications such as disaster management, land use and land cover change mapping, crop monitoring, and forestry management. TrueColour was derived from SSTL’s Disaster Monitoring Constellation (DMC) satellite. Incorporating it into MULA’s 130-kg-mass category will be “a new benchmark for Earth Observation capabilities at this mass and price point,” said SSTL Managing Director, Phil Brownnett in a press release. The satellite will also be equipped with two other payloads: Automatic Identification System (AIS) and Automatic Dependent Surveillance-Broadcast (ADS-B), which can be utilized for ship and aircraft detection and tracking. The preliminary mission objectives of the satellite were determined based on a needs assessment conducted by the ASP Project of the Space Technology Applications Mastery, Innovation and Advancement (STAMINA4Space) Program with various stakeholders in the Philippines during the first quarter of 2020.

“We are all very excited to start the development of MULA. Equipped with the acquired technical know-how and capabilities through our experiences in building DIWATA and MAYA satellites, we are now moving forward with our first operational and industrial quality satellite aimed towards providing a wide range of socio-economic benefits for the country,” said PhilSA Deputy Director-General and ASP Project Leader Dr. Gay Jane Perez. “With its capability to capture higher resolution images, we will be able to better monitor terrestrial ecosystems, as well as our land and marine resources to ensure both agricultural productivity and environmental integrity. In addition, we will also be able to assess environmental conditions to be more proactive in disaster management and mitigation.”

Dr. Perez further explained that while MULA will be the first of next generation satellites aimed at further strengthening the Philippines’ space technology research, development, and innovation activities, the initiatives won’t be from scratch, but rather, a continuation of unwavering efforts to capacitate our country in developing its own capabilities towards building a space ecosystem and adding value in space. “This is of course done not only to keep up with the global competitiveness but most importantly, it is so we can minimize our reliance on foreign technologies… so we can have our own scientists and engineers whose expertise in space science and technologies can be targeted and tailored specifically to the needs of our land and our people,” she said.

Since the first phase of the Know-How Training and Transfer (KHTT) for TrueColour kicked off in December 2020, over 30 Filipino engineers have remotely attended a small satellite system design course conducted by SSTL. Nine engineers are currently undergoing full immersion for the satellite design and manufacture process in the UK, having just passed the Qualification Status Review—an important design phase milestone. Simultaneously, ASP’s local team has been continuing its mission definition and know-how transfer efforts.

MULA Project Manager Engr. John Leur Labrador says that the planned multispectral imager calibrated for land assessment can be thought of as having our own “astronaut” in space.

“We can think of this spacecraft as a Filipino astronaut tasked to take images of our natural resources while monitoring aircraft and ship activity in our country at the same time,” he said. “We aim to significantly increase the land area captured by this satellite compared to our previous ones, effectively increasing the information gathered from the produced images.

Having worked on the Philippines’ small satellite projects since 2015, Labrador says he feels privileged for the opportunity. “It’s inspiring to think how far we’ve come, but at the same time, moving forward is an ever-present challenge,” he shared. “However, I’m confident that we are headed in the right direction, spearheaded by this project and the multitude of space technology ventures we are pursuing. These activities will bring Filipinos closer to our goal of playing a significant role in the rapidly expanding and high potential field of space technology.”

“The advancement of space research and development in the Philippines has always been part of the DOST’s priority goals, so the creation of the PhilSA during my service as DOST Secretary is something that I will always be proud of,” said Secretary Dela Peña. “More than the building of infrastructures and creation of micro-satellites, we have to train our young Filipino engineers. It is very crucial for us to build a competent pool of human resources who will train and inspire the next generation of Filipino scientific minds,” he continued.

“I commend these young Filipino engineers for continuously working hard to produce promising research and development (R&D) outputs, particularly their work on the Multispectral Unit for Land Assessment (MULA) satellite. I am very happy to note that they have just passed the Qualification Status Review (QSR), which is a crucial stage in the satellite’s design phase throughout their satellite development training with the SSTL of the United Kingdom (UK). Kudos to the whole team.”

“When we build satellites, we also aim to boost local industrial capabilities for producing high reliability systems. These are differentiated by their ability to work well in difficult and harsh environments (such as space), and can be at the core of globally competitive products,” said PhilSA Director-General Dr. Joel Marciano, Jr. “Furthermore, we use the satellites to generate images and other data, which we control and mobilize to support evidence-based policies for better governance, leading to productive communities and inclusive development. This is in line with PhilSA’s mission of value addition and creation from space that supports societal benefit and economic development.”

“The team also faced many challenges before we got to this point, made more difficult by the pandemic. We had to ensure that all documents are crafted according to what is required, that all compliance boxes are ticked off, and that proper coordination is made with various offices, which were often done at dizzying speeds like an orbiting satellite moving at 7km/s,” said DOST-ASTI Chief Science Research Specialist Engr. Alvin E. Retamar. He likened the project’s beginnings to a space sci-fi journey, with the engineers’ deployment to the UK right before the Covid-19 travel restrictions being a real life adventure in itself.

He also noted that this project is the DOST-ASTI’s second time working with SSTL, with the first one being the capacity-sharing agreement signed by the two parties in 2019 for NovaSAR-1.  “I must note that the familiarity should help us move things forward as we take some of the guesswork out for both parties. All these efforts and factors brought us to where the project is now and we all look forward to its completion. Till that day, tasks remain, the road is still long, so may the odds be ever in our favor.”

Secretary Dela Peña also noted how the DOST, through the Advanced Science and Technology Institute (DOST-ASTI), has spearheaded various initiatives that helped build a strong foundation for this endeavor. “Indeed, we have come a long way since the launching of the Diwata-1 microsatellite to the International Space Station(ISS)  in 2016, but there is still a lot of work to be done. We have just started,” he said.

“To sustain our momentum, it is crucial that resources continue to be available for our satellite development and space applications activities, which are all aligned with our national development goals. This is recognized in the Philippine Space Act no less,” adds Dr. Marciano. The PhilSA recently submitted its 2022 budget proposal to the Department of Budget and Management (DBM), with the development of MULA being included in its flagship program, ‘Build, Build, Build in Space (B3iS) – Philippine Satellites as a Vital Component of a National Information Infrastructure’.

The Philippine Space Agency was established on August 8, 2019, when the Republic Act 11363 or “Philippine Space Act” was signed into law. PhilSA builds on the foundation created by the development, launch, and operation of Earth Observation microsatellites Diwata-1 and Diwata-2, and CubeSats Maya-1, Maya-2 and the upcoming Maya satellites under STAMINA4Space (formerly “The Development of Philippine Scientific Earth Observation Microsatellite” or “PHL-Microsat” Program), together with Japanese university partners.

“STAMINA4Space, like all government-funded programs, has a termination date,” said STAMINA4Space Program Leader Dr. Maricor Soriano. “Developing MULA is a fitting finale that allows the transition of satellite development from an academic, research setting to an operational, PhilSA-led endeavor.”