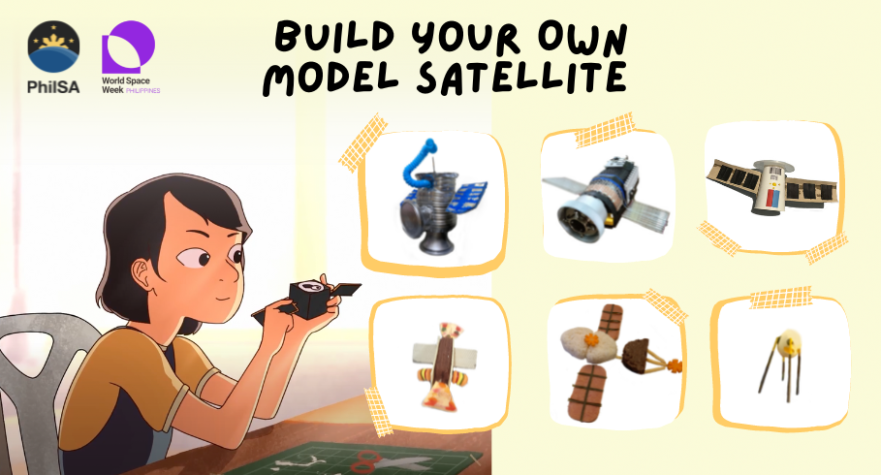 Fourteen kids aged 9 to 10 years old heeded this year’s call to join the mission to develop their own model satellites made of recyclable or edible materials.  All entries to the 2022 Build Your Own Model Satellite competition astonished scientists from the Philippine Space Agency (PhilSA) who evaluated the submissions.

In his opening remarks, PhilSA Space Technology and Mission Systems Bureau Director Dr. Marc Caesar R. Talampas encouraged the participants’ curiosity in space science and technology. He also gave insight on orbital debris concerns as a way to introduce the concept of sustainability to the kids: “As the future designers of Philippine satellites, you can help ensure the prevention of space debris through propulsion systems or deorbit mechanisms.”

Based on the lecture, the participants had to create model satellites consisting of a container (body), power source, scientific instruments or payloads, communication devices or antennas, and the orientation finder. Contestants must only use recyclable or edible materials. Each participant was also required to submit a short video explaining the mission of their satellite and how this would contribute to sustainable living on Earth.

The entities were evaluated by Ms. Muta, Dr. Hilario, and Engr. Daniel Fadi Rahayel, Supervising Science Research Specialist of PhilSA Spacecraft Electrical and Computing Systems Development Division, who were all impressed by the level of environmental awareness of the contestants at a young age.

The Build Your Own Model Satellite competition is aligned with PhilSA’s key development area to increase space education and awareness in the Philippines as an emerging space nation. It seeks to inspire the younger generation to #JoinTheMission and pursue an interest in space science and technology applications for the benefit of mankind.

Check out the entries below: