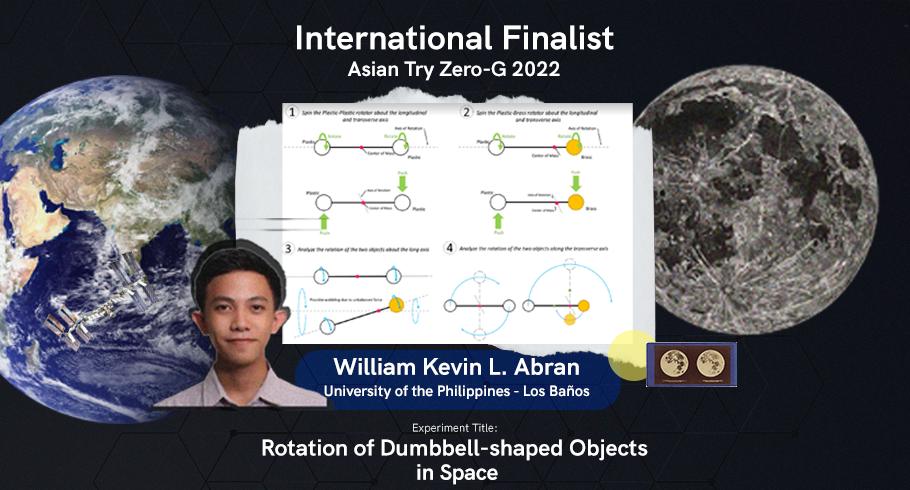 The Philippine Space Agency (PhilSA) is pleased to announce that the Philippine entry, “Rotation of ‘Dumbbell-shaped’ Objects in Space,” is one of the six experiments chosen to be performed in the International Space Station (ISS) for the Asian Try Zero-G (ATZG) 2022. The experiment submitted by Mr. William Kevin L. Abran of the University of the Philippines-Los Baños was among the 24 international finalists of the ATZG competition.

Eight Kibo-ABC-participating countries/regions were called for the ATZG 2022, where a total of 201 submissions were received from 480 students and young engineers/researchers. Proposals were evaluated based on scientific significance, novelty, safety, resource requirement, and feasibility. Astronaut Koichi Wakata will perform the experiments beginning Fall 2022.

PhilSA led and organized the local call for proposals for this year’s ATZG Philippines. PhilSA accepted and screened proposals from 09 to 29 May for the preliminary round, and selected five experiments, including Mr. Abran’s, to enter the final round of evaluation by the Japan Aerospace Exploration Agency (JAXA).

ATZG is one of the activities of the Kibo-ABC program that aims to expand the use of the Kibo module on ISS and develop the youth’s understanding of space environments. PhilSA Deputy Director General Dr. Gay Jane Perez is the country’s point of contact for all Kibo-ABC activities.

These images show the procedures and predicted outcomes of the experiment proposed by William Kevin L. Abran. According to Mr. Abran’s proposal, a rigid object, like “dumbbell-shaped rotators”, could be spun about the longitudinal axis and along the transverse axis. It only has two distinct principal moments of inertia, therefore, a rotation along the principal axes must be stable and will not result in the Dzhanibekov effect. It is difficult to physically simulate these motions on the ground without pre-determining the center of mass or without the constant application of force. However, in a free environment, like in microgravity, rigid objects could rotate continuously for a fair amount of time, so it will be possible to observe the long-term stability of their rotations.

Asian Try Zero-G 2022 is an international cooperation experiment launched by the Japan Aerospace Exploration Agency (JAXA), targeting the youth in the Asia-Pacific region to expand the use of the International Space Station (ISS) and the Japanese Experiment Module “Kibo” and contribute to Sustainable Development Goals (SDGs) through human resource development. For this year, JAXA Astronaut Wakata will conduct the selected experiments in orbit. For more information, visit https://humans-in-space.jaxa.jp/en/biz-lab/news/detail/002331.html