“Capacity Building for a Nascent Space Industry” Technical Presentation at the 65th Session of the UN COPUOS
Posted by: Philippine Space Agency 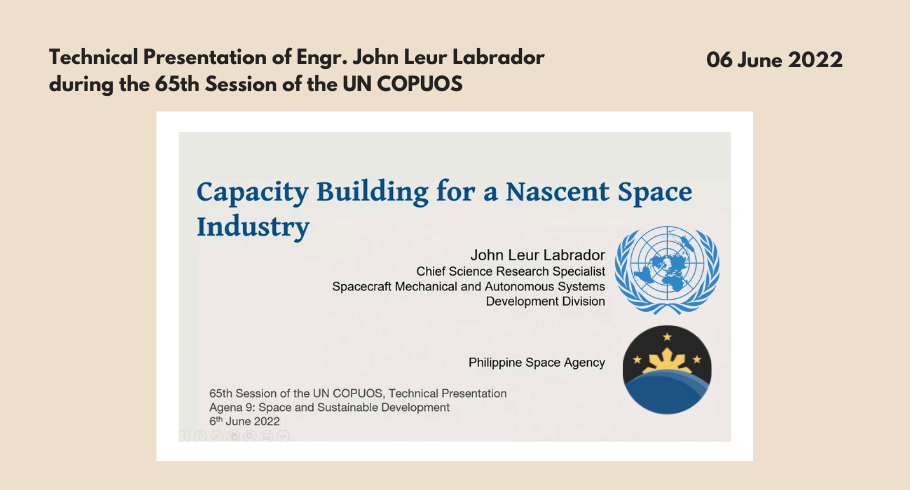 The statement highlighted the Philippines’ ongoing capacity building activities and its existing partnerships with the “space-adjacent” sector, geared toward boosting the upstream space sector, enhancing space-derived economic benefits, and strengthening the role of the space sector as a major driver of sustainable development.

65TH SESSION OF THE UNITED NATIONS COMMITTEE ON THE PEACEFUL
USES OF OUTER SPACE, TECHNICAL PRESENTATION

The Philippine Space Agency appreciates the opportunity to highlight our activities toward enhancing space-derived economic benefits and strengthening the role of the space sector as a major driver of sustainable development.

In particular, PhilSA focuses on the following Key Development Areas:

Today, I will highlight ongoing PhilSA activities that contribute to space industry capacity building and the sustainable development of space technology in the country and the region.

But before that, let me give a brief background of previous activities in space technology. The Philippines has gained experience in developing small satellites, notably in collaboration with foreign institutions that offer capacity building and knowledge transfer programs. Aside from building spacecraft, these programs focused on equipping the Philippines with the capability to develop spacecraft independently.

The STAMINA4Space Program, or S4S, followed shortly after. S4S aimed to sustain the results of PHL-Microsat by moving development efforts locally, starting with a 50-kg class satellite platform that can flexibly serve different mission payloads. S4S also initiated the development of a primary camera payload with supporting subsystems, building on top of learnings gained from PHL-Microsat.

While S4S engineers could make the system- and subsystem-level designs and requirements, they needed assistance on the manufacturing side. Thus, the S4S program worked with Filipino companies inexperienced in developing space technology products. This initial collaboration was a success as it produced satellite parts that were used and operated in space. Moreover, these partnerships highlighted the importance of cooperation between the Philippine Space Agency and private institutions.

The private companies tapped by S4S are in the “space-adjacent” sector. PhilSA views this sector as those involved in activities whose final products are not meant for space but follow the workflow, processes, and techniques that can adapt to space technology product development.

The Electronics sector is one of the space-adjacent industries, which in the year 2021, was the largest collective exporting entity in the Philippines. The capabilities of a mature Electronics industry suggest a high potential for developing space technology products. In the future, PhilSA can tap these companies’ IC manufacturing techniques and processes to produce reliable onboard computing units that are fault-tolerant and radiation-hardened – suitable for space application.

Likewise, PhilSA hopes local software companies could design and implement robust operating systems with failsafe mechanisms for satellite applications in harsh and uncertain environments. Radio Frequency, or RF, companies also have the potential to shift some of their manufacturing capacity from terrestrial-based to space-bound communications systems. The same goes for Power Electronics companies, currently focused on solar power generation and storage, but have the potential to miniaturize their designs and guarantee their usage in harsh environments.

Moreover, we also consider industries that cater to supplying aviation and automotive parts as space-adjacent, as they have processes that adhere to strict standards that center on safety and reliability.

These efforts hinge on the promise of space becoming the next manufacturing hub, as evidenced by the proliferation of mega-constellations and the required terrestrial network to support their operations. However, if this vision falls short, the companies still get to add a critical capability to produce reliable products under stressful conditions.

PhilSA realizes that one way to bridge the gap from being “space-adjacent” to becoming a full-fledged space sector is to expose companies to the different facets of spacecraft development. More importantly, PhilSA can provide an opportunity for these companies to demonstrate the flight readiness of their products through a technology-demonstration mission.

This year, PhilSA has inaugurated the Integrated Development of a Unified Standard 3U System, or InDUS3US, under its Build, Build, Build in Space initiative. InDUS3US aims to capacitate local companies and pave the way toward a more sustainable upstream space sector in the Philippines.

We issued an open call for companies to send in their engineers that might have an interest in satellite development. We focused on companies whose expertise applies to developing satellite subsystems. In the end, we received enough interest from local companies to fill the various roles.

Finally, we also recognize the need to follow internationally-recognized standards in this field. Thus, while all these development efforts are happening, PhilSA is also in close coordination with the Department of Trade and Industry, our national standardization body, pushing for the adoption of space systems standards. Industry groups poised to form and lead a future space sector will play a key role in promulgating these standards.

In summary, PhilSA’s Project InDUS3US will expose local companies to the facets of satellite development. The goal is to equip them with the knowledge to play a substantial role in future satellite missions, not only in the Philippines, but also in the region.

All these efforts contribute to the long-term goal of extracting economic value from space technology. While there is a relatively mature downstream sector in the Philippines, the upstream sector must catch up to meet its demands. Through government support such as Project InDUS3US, we hope to realize economic value by creating jobs in the space sector, leading to a more vibrant and sustainable space economy.

Thank you very much for your attention.