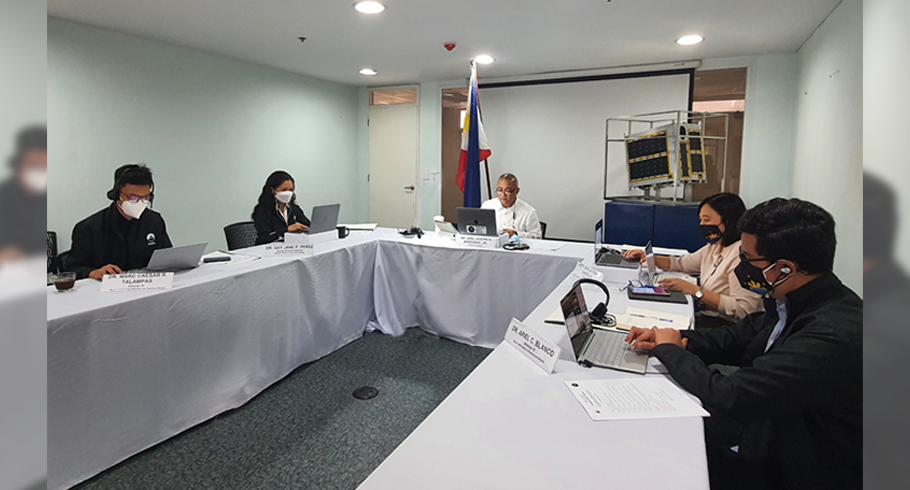 The meeting was chaired and called to order by Chair-designate Secretary Fortunato Dela Peña Jr., of the Department of Science and Technology, and Co-Vice Chairperson of the Philippine Space Council.

The Office of the President was represented by Ms. Jinky Joy dela Cruz-Paril and Ms. Alexis Abetria from the Office of the Deputy Executive Secretary for General Administration. In his video-recorded welcome remarks, PSC Chair, His Excellency Rodrigo Roa Duterte highlighted the significance of the meeting in ensuring the country’s representation in the international space community by establishing cooperation agreements and linkages on space development. The President further ensured the administration’s full support in all of PhilSA’s activities which advance space science and technology in the country.

During the Director General’s Agency report, Dr. Marciano discussed how PhilSA has been actively mobilizing spaceborne data, such as images and other information from satellites, in support of national security, environmental conservation, and livelihood activities.

Supporting the Inter-Agency Task Force on Zero Hunger, the PhilSA works with the Bureau of Fisheries and Aquatic Resources (BFAR) and the National Fisheries Research and Development Institute (NFRDI) to determine productive fishing grounds at a country scale. Through analysis of space data, the PhilSA generates maps that help identify potential fishing zones within and beyond municipal waters.

The PhilSA is also expected to contribute to the implementation of the National Copernicus Capacity Support Action Program for the Philippines (CoPhil), specifically in hosting the local mirror site for Copernicus data that enables access and exchange of space data between the European Union (EU) and the Philippines in support of disaster risk reduction and climate change adaptation objectives.

The PhilSA is also partnering with the the United Nations Economic and Social Commission for Asia and the Pacific (UNESCAP) and South Korea National Institute of Environmental Research to combine the ground-based air quality monitoring and satellite observations through the Pan-Asia Partnership for Geospatial Air Pollution Information or PAPGAPi. The project will be in collaboration with the DOST Philippine Council for Industry, Energy, and Emerging Technology Research and Development (PCIEERD), Advanced Science and Technology Institute (ASTI), and Philippine Nuclear Research Institute (PNRI), and DENR’s Environmental Management Bureau (EMB) and NAMRIA.

Dr. Marciano also reported the launch of the AD ASTRA (Advanced Degrees for Accelerating Strategic Space R&D and Applications) scholarship program, a milestone in the Agency’s efforts to build a local knowledge workforce.

“We are happy to note that despite our scholarship division still being set up, PhilSA personnel worked together to come up with our scholarship guidelines and to start implementing the program,” Dr. Marciano said.

The program aims to provide financial support to eligible students who are aiming to pursue a graduate or doctoral degree in fields related to Space Science, Technology, and Applications (SSTA), either in local or international higher educational institutions.

The PhilSA has also been engaging other government agencies by providing capacity-building activities, in line with its function to improve access and resource sharing of space capabilities.

Expansion of the Local Space Industry

The PhilSA’s strides in expanding domestic space technologies and industry were also discussed in the meeting. In October 2021, the Agency launched the INCENTIVISE project, an invitation for operators of NGSO Satellite Constellations to conduct test deployments of their Internet services in the country. Dr. Marciano further noted the value of an inter-agency approach in implementing the project, noting the contribution of the DOST-ASTI, and the ongoing coordination with the Department of Information and Communications Technology (DICT), Department of Finance (DoF) and the National Telecommunications Commission (NTC).

The Agency also provided an update on the development of the Multispectral Unit for Land Assessment or MULA Satellite—the first commercial-grade satellite of the country capable of addressing several of the key challenges in disaster management, land use and land cover change mapping, crop monitoring, and forestry management. Phase 1 of the MULA development was funded by the DOST through the STAMINA4Space Program.

“As we build MULA, we also spur local industry development by cascading the knowhow and technologies […] this engages the local supply chain especially in design manufacturing and test of local satellites, which can create high value industries, jobs and inbound capital. Overall, this contributes to the growth of the domestic space technology and industry.,” Dr. Marciano said, emphasizing how the development of MULA opens opportunities for the Filipino workforce to contribute to the advancement of local industries.

The PhilSA has been representing the country in various international space-related fora, and have been engaging  several foreign counter space agencies such as: the National Aeronautics and Space Administration (NASA), the Japan Aerospace Exploration Agency (JAXA), UAE Space Agency (UAESA), the Centre National d’études Spatiales of France (National Centre for Space Studies  or CNES), the Comisión Nacional de Actividades Espaciales of Argentina (National Space Activities Commission or CONAE), and the European Space Agency (ESA). The Agency also signed international agreements with the United Nations Office for Outer Space Affairs (UNOOSA) and JAXA this year, and sent a delegation to the United Arab Emirates for the Expo 2020 Dubai Space Week and the 72nd International Astronautical Congress (IAC).

Towards a stronger inter-agency cooperation in SSTA

Dr. Gay Jane Perez, Chair of the Decadal Survey Technical Working Group, expounded on PhilSA’s efforts in developing an integrated and sustainable national space program through its 2021-2030 Decadal Survey, which identifies the priority challenges in Earth observation and other satellite applications relevant for the country in the coming decade. These focus areas (FA) are the following: (1) Hydrologic cycles and climate studies; (2) Weather, Air Quality and Atmospheric processes; (3) Earth Surface and Interior: Dynamics and processes; (4) Hazards and Disaster RIsk, Reduction and Management; (5) Aquatic Ecosystems and Water Resources Management; (6) Terrestrial Ecosystems and Land Resources Management.

During the meeting, the council approved the resolution which directs further work on the following FA’s in the Decadal Survey: (1) FA 7 on Communications and Navigation, and; (2) FA 8 on Defense and Security. The PSC members also approved the Decadal Technical Working Group report and recommendation on the 2021-2030 Decadal Survey.

Speaking later to PhilSA, Dr. Perez said: “With the valuable contributions of the Decadal Survey TWG, we are able to gain deeper insight into our capacities in SSTA in addressing the country’s pressing scientific challenges and objectives. This information coming from different representative stakeholders in the academe, government, non-governmental and private organizations sheds light on both our strengths and the gaps in our space capabilities, making us better equipped in designing sustainable SSTA programs and the overall satellite mission development roadmap for the coming decade.”.

Building upon the report from the Philippine Space Agency, members of the council also manifested their support by approving a resolution which will promote and ensure responsible behaviour in the use of space objects and in the conduct of space activities affecting the Philippine jurisdiction.

As a response to the need for national regulations and protocols on outer space activities, the council approved the Proposed Creation of an Inter-Agency Technical Working Group (TWG) on Orbital Debris Protocols. The TWG will serve as the principal advisory body for the coordination, discussion, and formulation of the country’s strategies and mechanism for responding to anticipated outer space activities which could affect the Philippine Territory.

The Philippine Space Council was created under the Philippine Space Act (Rep. Act No. 11363) and acts as the principal advisory body for the coordination and integration of policies, programs and resources affecting space S&T applications. It is currently chaired by President Rodrigo Roa Duterte, with the PhilSA Director General Joel Joseph Marciano Jr., sitting as the head of the Secretariat.

The council is scheduled to meet for the 5th Philippine Space Council Meeting on 19 April 2022.